on March 08, 2019
The Australian band Pond have returned this year with their eighth studio album titled 'Tasmania'. It has been announced as the sister album to their previous release 'The Weather' from 2017. Both albums and like all the others, have been produced by Kevin Baker of Tame Impala fame with whom the band also shares band members and they also tour together. 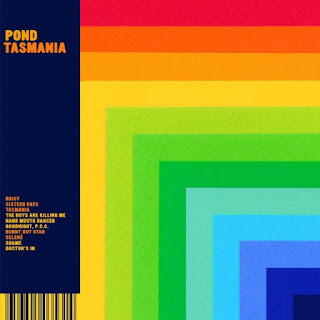 For their eight studio long player the band is taking us to the Island of Inspiration, or so to say, it feels that the band managed to draw a great deal of inspiration from their native Australia and Tasmania. Like the previous album and most of their releases, this one is in the Psychedelia vein and it explores the new topics with the well kept music formula. It tackles some political and environmental issues, without getting too heavy and remaining on the pop ground. The album opens with "Daisy" and "Sixteen Days", both previously released as singles. "Daisy" is perfect for spring break and a start of new concept, the Geneve inspired "Sixteen days" follow and gets us some French lines and another highlight comes with "Tasmania" and the wonderful chorus "I might, I might go shack up in Tasmania, Before the ozone goes, And paradise burns in Australia" where the synth elements play very well with the proggy guitars. By reaching the middle of the album, the songs get more elaborated, thicker and less immediate, with "Goodnight P.C.C." and "Burned out Star" eventually closing with the apocalyptic "Doctor's In" track. Here and there are nice sound accessories which contribute to the layering of the sound including, retro vocoders, colourful guitars and glitchy forms on "Shame". Another interesting feature is the inviting album cover which seems to be Poloroid inspired and it implies that based on the single released so far that each colour will represents one song on the album.


Colourful as it comes, this psychedelic cocktail will give a nice intro to a Spring start, wherever it may hit, and might also be the preparation for the new Tame Impala album which will hopefully be ready for this summer.