2018 has been quite silent and not such active year with news and updates from our end. Musically there were some interesting releases but much weaker with offer (hardly any synthpop) than the previous years in this decade. Regardless to this, every year comes with certain charm and some records still manage to impress and leave long lasting memory.
What was evident, especially in the top albums pool, is that top four albums, in direct or in indirect way link to the LA music scene, and at least two of them feature collaboration with Ariel Pink which means that we have a thematic top five for the first time.
This year on our menu we have top ten favorite albums plus additional ones worth mentioning, also great but did not make such impact like the first ten. Of course there are always other good ones that we missed who might be considered in the years to come along the new releases. 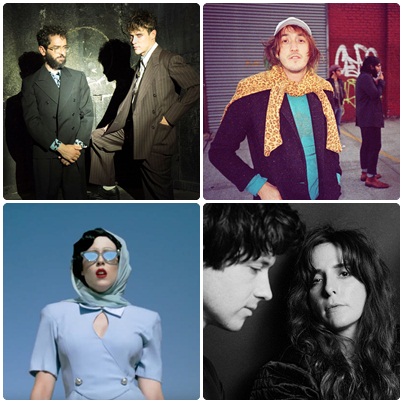 'Little Dark Age' was the first big album in 2018 for us and it remained our favorite throughout until the end of the year. Their fourth album came almost like a ten years anniversary to their debut which changed the music face of 2007. A great mixture of sounds, pointing retro to 80's synth pop and dark wave on one side and LA inspired psychedelia on the other side made this album outstanding in terms of musical concept where the musical skills and magic of MGMT worked very well.

Top tracks: Little Dark Age, When You Die, Hand it Over, Me and Michael, When You are Small

Beach House released their seventh studio album '7' in May. This album seems to be rounding up all Beach House have done in this decade in one piece, but also reaching new heights and exploring new musical expressions. Album opener “Dark Spring” already sets the clear tone of the album and it is in line with Beach House’s dense and immersive dreamy sound and aesthetics. It might not have been a first listen affair, but goes under the skin soon and well deserved runner up position.

Part Time aka David Loca released his sixth album fittingly entitled ‘Spell #6’ in the fourth quarter of the year. After numerous albums and single releases and collaborations, David's Part Time has finally delivered the first studio recorded work where he manages to keep us under his spell drawing again inspirations from his standard 80’s palette and mixing it with Lo-fi electronics. He even teams up with Ariel Pink for an interesting duet and also delivers some interesting video concepts for his single releases.

Top tracks: Hide, I Can Treat You Better, So Far Away, I Didn’t Know, Silent Francine

Alexandra Hughes released her second album under the Allie X moniker in October. This mini album includes 8 tracks and reflects on L.A. ups and downs where Allie has been living five years now. There are several different influences scattered through the album in both visuals and sound, most notable Lana Del Rey and Lady Gaga. What's good about this album is that it has a clear concept where Allie keeps it pretty much brief and very effective with her very inviting electro pop style mostly wrapped in retro visuals.

Top tracks: Not So Bad in LA, Science, Girlfriend of the Year

Johnny Marr released his third studio album in June this year. On this album, he manages to reflect on his music past with the Smiths on few tracks and on the other hand hes is delivering very innovative indie rock with dark influences of post-punk and even industrial. In general the album comes with a very good atmosphere and although there are 12 songs on it, there does not seem to be any weak track on it. Everything from song writing to the production level all the way to keeping up the good dynamic is very well synchronized here.

Robyn released her 8th studio album marking 23 years in music business since her debut in 1995. She still looks and sounds amazing and with ‘Honey’ she manages to drop a prefect hybrid of synthpop and deep house which immediately engages with the listener. She borrows elements from all previous decades making this album vibe and shine. ‘Honey’ also comes as a very appropriate title and some of its grooves may turn your living room in club disco.


07. Actors- It Will Come To You [Artoffact Records]

Vancouver based Actors released their debut album in March this year and already from the title one could assume there was big thing coming from the Actors' machine in 2018. Actors remained loyal to their very unique dark electronic post punk sound on their debut and to promote it, they were also massively touring in Canada, North America and Europe setting up some great live shows. And this just seems to be the start from the ACTORS as I am sure Jason Corbett the lead singer/producer/song writer has big plans for the years to come.

Although Pinkshinyultrablast already released two albums and this being their third, the band was quite new to us. Based in St Petersburg, Russia, we are quite happy to hear such music trend coming from the east. The band manages to engage with a whole range of different influences and music styles where dream pop meets with shoegaze and synthwave to form a real musical delight. They are real masters to recycle nostalgia into innovation and you might easily recognize elements of My Bloody Valentine and Cocteau Twins

Top tracks: Dance AM, In the Hanging Gardens, Eray

U.S. Girls aka Meghan Remy released her seventh studio album 'In a Poem Unlimited' this February and her second on the 4AD label. The beats on new album reflect 60's and 70's music styles influences, free jazz forms, boogie disco and funk which turn this venture into more organic and expressive music event. It is very dynamic with some pop delights here and there, the lead single "M.A.H.", down-tempo "Rosebud" and more electronically structured "Pearly Gates" and "Poem". Even the protest tone in some songs resonates with the music grooves well.

Danielle Johnson aka Danz has released her second album on her own label ‘Channel 9 records’. On this album Computer Magic manages to spark inspirations from science fiction, videogames and art, confronting the reality and fiction with futuristic electro pop styles. Interesting fact is that as Computer Magic's Danielle already released three more album exclusively in Japan where she is already fully established music artist.

2018 Actors Album of the Year MGMT The Album List