on December 24, 2017
Time has come to enroll with the best EPs for 2017. From some of the well established veterans in music biz, all the way to the bandcamp pioneers. This year has been dominated by Post Punk and Darkwave, but there were also other musical sub-forms which all contributed to this whole variety of sound which are packed in 15 impressive EPs. 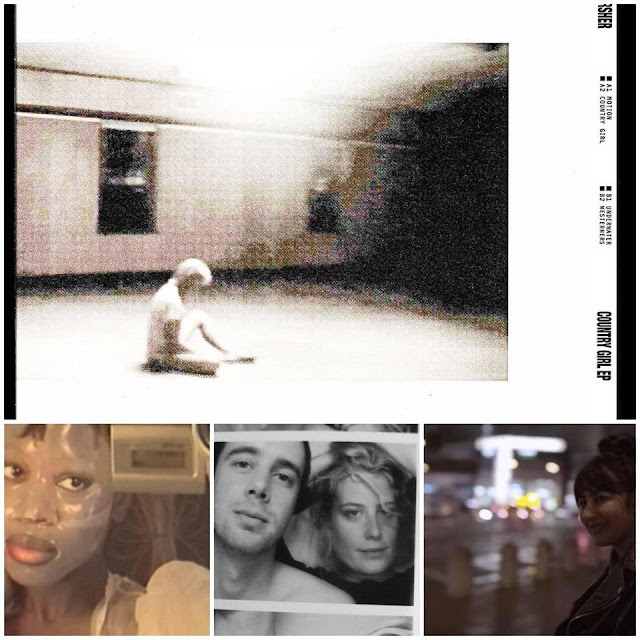 This year Boy Harsher has been high on agenda for us with their distinctive electronic music style. They continued what they have started with their debut album 'Yr Body is Nothing' while on the new EP the songs are even sharper and hard to resist. Good quality layering and programming is complemented with the seductive singing tone which brings the body in the right motion. In a brilliant way they manage to define a new Dark.

After a series of single releases since 2012 when the band took format, ACTORS have released their first EP. It is titled 'Reanimated' and it compiles the singles and b-sides that were released between in 2014 and 2015 and this time remastered. In an excellent way they manage to renovate some of the great influences from the past decades, in particular late 70s and early 80's by creating their own New Wave/Post-Punk ritual. Next year sees the release of ACTORS debut album and we are very much looking forward to it.

This year Nine Inch Nails made quite a buzz when they appeared on one of the episodes of 'Twin Peaks - The Return'. They released a brand new EP which follows on 'Not The Actual Events' from last year. With the first four tracks, the band has shown once again that they are very well conversant with the electro industrial rock techniques and the songs also come with elements of shoegaze and triphop.
4. Blonde Redhead- 3 O'Clock [Ponderosa Music & Art Srl]

Blonde Redhead are no stranger to the EP format and this is their 5th EP release in 17 years.  There must be something about the number three, as this record was released on March 3rd and it is entitled '3 O'Clock', but we haven't figured out. With this release they managed to return to the essence of their sound. Again this is a very warm and distinctive chamber pop with elements of dream pop and smooth orchestration echoing in a sweet enchantment.
5. David Bowie- No Plan [Columbia]

'No Plan' was released in January 2016, one year after Bowie's death, what would have been his 70th  birthday. "Lazarus" was already featured on 'Blackstar' while the other three tracks were from the Lazarus Cast Recording. 'No Plan' continues in the mood of 'Blackstar' and it offers another great portion of songs paying tribute to the late David Bowie.


6. Crimer- Preach [Muve]
Crimer aka Alexander Frei is introducing real Euro electropop to our EP charts. He comes from Switzerland and this is the first after a long time that we include a Swiss act on one of our lists. Very much 80's influenced, both in his music and visuals, his songs combine striking melodies, great synth hooks and Alex' rich baritone voice comes to complete the musical synthwork.

Former Friends singer Samantha has released her debut EP 'Policies of Power'. This EP includes "1,2,3,4" and "You Know I Know" from 2015 plus three new tracks. Given that the records includes some older more upbeat songs there is a whole variety of styles that influences every stage of her career including 80's/90's pop and R'n'B. All songs were composed by Urbani herself and retro pop is her way to deliver her messages to the audience.

8.The Sounds- The Tales That We Tell [Arnioki Records, LLC]

During the 00's we were having some nice episodes with the Sounds' second album 'Dying to Say This To You'. Ten years has passed since then and  the releases meanwhile were  not so striking. This year The Sounds have returned with their first EP with which  they manage to, once again put together a very enchanting retro sound with a modern girlie wave teaser. It would be a perfect opener for Blondie's 'Pollinator'.

Two years after the release of their debut 'Services', this year Tempers have returned with this EP release which includes four new tracks. The songs on this EP follow the structure of the previous Tempers releases and again it's ethereal, cold and melancholic, but this time also born out of live improvisations. Their brand of dark electronica is even more emphasized to create a scenery of romantic illusions.


10. The Perfect Kiss- Disconnect [Elefant Records]
The Perfect Kiss is a brand new music project from writer and producer, Joe Moore of Yearning. and 'Disconnect' is their debut EP which was released earlier this year. It is a homemade DIY pop thing with strong influences from St Etienne, Ladytron and New Order. Singer Holly Vanags' angelic vocals delicately suits the lyrical and musical themes.
11. Digital Romance- Digital Romance [Bordello A Parigi]

Digital Romance is a brand new project from Pierre de la Touche who is now stranger to the Dance music scene. He has teamed up with the singer Marie de Berlin to create Digital Romance, a vintage electro dance inspired project. Very much Italo Disco inspired, it reminds of some of the biggest Italo hits from the 80's decade, but with a fresh new textures and layers.

Belgrade-born, Toronto-based electronic music producer and singer Kaade is one of the best new comers this year. Her debut release, 'Encounter with Power', explores themes of outsider culture, masculinity and power dynamics. Composed between Berlin and Toronto, the four track EP layers frosty synths over pulsing rhythms, crafting her own style of dark and danceable pop. Kaade made her live debut in 2016 and has since shared the stage with a wide range of artists; from Black Marble to Inga Copeland.

Matthieu Roche from Parisis the man behind the Fragrance project  and he has released two singles and one EP. The music of Fragrance is atmospheric dream pop with playful synth waves and mellow vocals. This year fragrance released the single "Heatwave" and the EP 'Dust & Disorders', both mastered by Hélène de Thoury who we remember from Minuit Machine and Hante fame.

New Thrills come as a thirty year celebration of the Primitives. This record proves that the band has aged gracefully and their pop numbers are almost as catchy as they were on their first albums and that they are full of fresh verve. This record is here to confirm that The Primitives are certainly ready for the New Thrills.

Another interesting Ascetic House formation Din have released their debut EP this year titled 'Saturate'. They explore new ways of minimal and darkwave sound with elements of Techno and industrial. Their sound is multilayered and hypnotic and engages with the listener every second. Din have also released their debut album Real Dirt on DKA Records.
2017 Actors Boy Harsher Crimer David Bowie EP EP List Tempers The Sounds