on August 14, 2015
It was October 2012 when we first got in to the music of October Dance. It was a lovely autumn electro dance affair of "Houses Falling" that caught our attention back then....and yes it happened in October somehow! It still remains as one of the most memorable songs for this year. Soon after, band's universe started to grow. They secured the first record deal, released first EPs and their fanbase has been growing since that. It hard to describe their music in one genre; it has its roots in art pop and it is dance music inspired by variety and diversity of 70's disco, 80's sytnh-pop and 90's house-pop. This year, they have also been performing on the Roskilde festival for the first time and got big plans for the future. Find out more about October Dance's early influence, music video releases and much more. 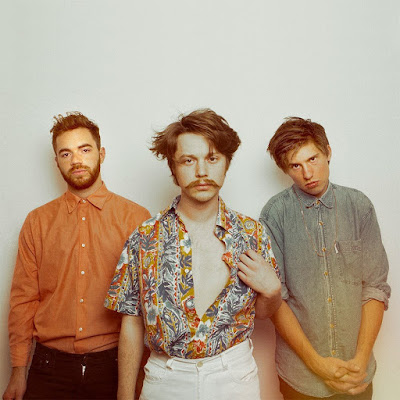 1. What is the story behind the name October Dance and how did you guys meet and decided to do music together?
We were actually gathered by the Austrian artist Hans Tolford in 2012, and the name is taken from his poem “October Dance and Somersaults”. He had heard us play in another constellation before and decided that we should be the interpreters of his drawings, he wanted us to make music out of his drawings. We could do what we wanted to do with them, as long as we used them for our creations. His drawings was the starting point of October Dance. As of 2015, October Dance is Uffe Dalskov, Saxe Lomholt, Tobias Kiel and Kristian Bønløkke

2. How would you describe your music to someone who did not listen before and what are some major influences in music style?
We tend to describe our music as 80’s Art Music. But lately we kinda got the label NY disco on us. We are inspired by many artist and styles, but main artist would be Talking Heads and Arthur Russels Loose Joint.

3. Back in 2012, when I discovered October Dance, you were teaming up with the artist Hans Tolford from whom you borrowed visual ideas for the music video “Houses Falling”. Did the collaboration continue?
Unfortunately, Hans Tolford died in September 2013. It was pretty unexpected for us. We had a continuously collaboration with him up until his death. Our collaboration with him was very free, he did not dictate what we should do, it was more like a creative influence and inspiration from both sides. The Tolford Foundation is now taking care of his work and afterlife and our work with him has ended, but he is still with us in our spirits.

4. What can you tell us about the writing and recording process of your music, who does what?
The writings is in different stages. We make small sketches individually and then when we have something we want to work more on or finish we meet up and finish it together.We were living in three different countries, Denmark, France and Iceland, when we made our last EP “Group Pleasure”. Of course that made some difficulties, and made the process a little longer, but with the lovely internet, everything is possible, so it was easy to send music and sketches, and to record it in different countries. A small bonus note, the vocal of High School is recorded in Sweden. But we ended up finishing the EP at sunny coast of Spain in a small city called Almunecar.

5. Do you prefer the writing and recording to peeforming live or vice versa?
We really enjoy both aspects. The process of recording is intense, but also very given, but playing live is why we do music, why we record music. The joy of hundreds of people dancing to our concerts is worth more than thousand butterflies.

7. Tell us more about you video caravan this year. You have released four music videos. Who were they directed by? I’m particularly interested in the storyline of “Rouge”. Except for Youtube, where else can the videos be seen?
We decided that we didn’t wanted to do another EP, so we came up with the idea of only releasing singles, but releasing them with videos. So we teamed up with 4 different artist who directed the videos. Hehe, "Rouge"… Well that one is directed by Theo Bat and basically, as the lyric says, “save your money” we did so by snatching fruit. Fruit lovers, fruit for drinks, fruit for fun, fruit for love. And it’s healthy too, haha. "Tropical Eyes" is directed by London based artists Stine Deja and Roxanne Gatt. "Heart of Romance" is directed by Copenhagen based artists Marie Boye and William Reynish and "Voyage of Love" is directed by Stockholm based artist Anders Karlén.

8. October Dance fan base is growing slowly and you have also performed on Roskilde Festival this year. What was the general experience?
MAJOR EXCITEMENTS. That was an unexplainable experience. Roskilde Festival is, especially for Danish artists, the thing to play at. We were so happy about it and I actually don’t know what to say more, it was WOW.

9. What are you listening to when you are not recording your own music?
We all have a very different taste in music, so I can only speak for myself at this point, but at the moment you will find, Chopin, YMO, Vangelis, Kitaro and Jean Michel-Jarre on my vinyl player.

10. Currently we are running a campaign for the best song from 1985. What would be the favorite form each of you? [list of songs that can help] http://burningflameblog.blogspot.com/…/top-singles-of-1985-…
Here we have to answer ‘Oh Yeah’ with Yello from 85. They have been of great inspiration from the beginning and if you listen carefully to Houses Falling from our first EP, you will be able to find a tribute to that track.

11. Any plans of an album, future releases, tours in Europe?
At the moment we are working on France, hopefully we will play some gigs at the end of this year 2015, around in Europe, things are looking good.! No plan of an album right now, we love the idea of singles, but more music will be released. Aaaand it might turn out to be an album.