Echo and The Bunnymen Release a New Compilation

on April 17, 2015
Echo & the Bunnymen have released a new two-CD set compilation summarizes the band’s output between 1979 and 1987. The compilation is entitled 'Do It Clean: An Anthology' and it is a 38-track collection which actually contains all the band’s singles from this era including non-album 45s and "People Are Strange" from 'The Lost Boys' soundtrack. There’s a small sprinkling of relative rarities with the inclusion of The Original "Cutter" – A Drop in the Ocean – originally on the flipside to "Never Stop". Speaking of which, that single is also included in its remixed form (Never Stop (Discotheque)). New sleeve notes from Paul Lester are included in the 16 page booklet. Do It Clean: An Anthology 1979-1987 is out on 16 April 2015. 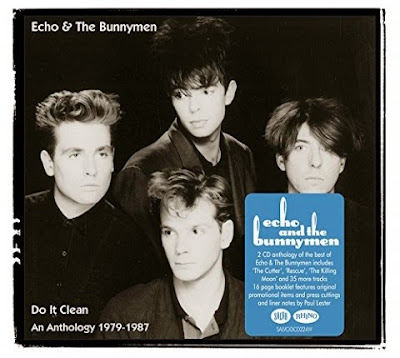 Echo and The Bunnymen