In Conversation: People at Parties

on December 13, 2014
People at Parties came as one of the best discoveries in 2014 and we are already thinking about naming them as our newcomer of the year. Very impressive, prolific and brilliant what these girls managed to deliver this year. A real new wave music inferno combining influences from both sides of the Atlantic. People at Parties are LK Naps (Vocals) Kelly Harris (drums) and Becky Kupersmith (synths). The bands first official full length self titled release came out November  2013 in digital form with official vinyl release in February 2014. Their debut album which combines dirty lo/fi electro with underground synth pop has certainly been a great soundtrack for our 2014 and we do hope to hear more of them in 2015. About this and more, find out in this exclusive interview. 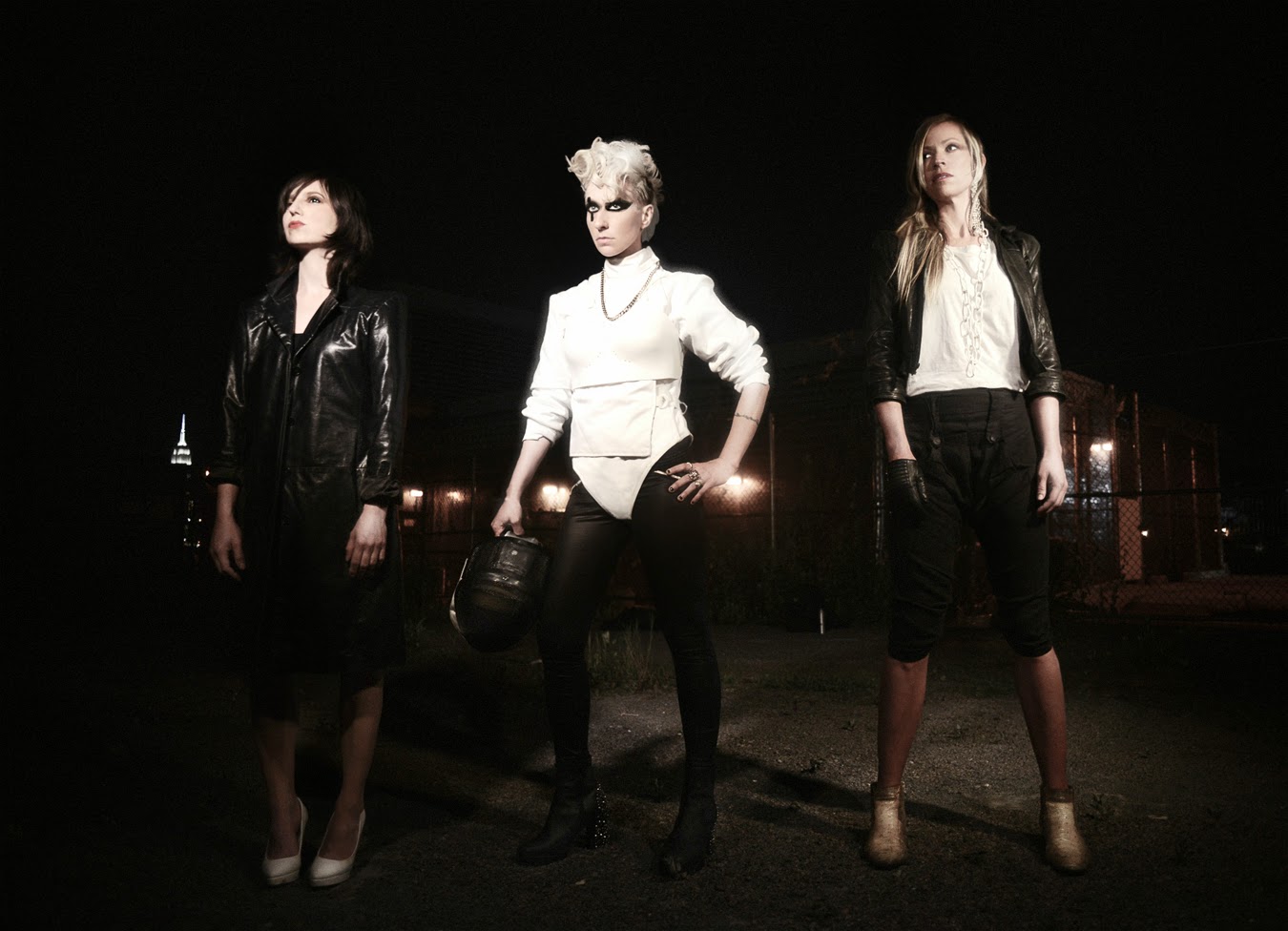 
1. Who are People at Parties? When did you first meet and decide to do music together?
We were all distant fans of each others former projects we didn't really know each other, but one night wound up at the same bar in Brooklyn through a mutual friend... I gave Kelly a CD of a solo project I was doing, but was looking to collaborate on something new. The next week while her and Rebbecca were still in town, we decided to do a jam session for the hell of it... just to mess around, we had no clue if we would even mesh well with each other. I don't think any of us expected to connect as well as we did that first time, it was like we had all already been in this band together forever...seamless and effortless...every sound and every space between was perfect. It was new and it was old and it was completely different. I think we all knew right then that we needed to work together seriously.

2. Which artist, band or genre has influenced your music? Anything outside the music maybe? KH..I really am into David Byrne and Mark Mothersbaugh, I love that they are artists in every sense of the word...I just finished Byrne's "How Music Works," it's a great overview for anyone to read who is the slightest bit interested in the relationship between artist creativity and the music industry.
LK..It would be so hard to pick one band or genre so I'm going to say Dan Flavins light installations..the simplicity yet the strength and intensity has always inspired me.

3. Being divided between NY Brooklyn and San Francisco, where do you feel at home?
Home may be different for each of us but I think as a group we are incredibly comfortable on both coasts

4. Could you elaborate on your songwriting and recording process? Who takes on what particular responsibilities?-
It's sort of different for each song, we don't really have a formula. The writing process is usually a flood of energy and emotion for all of us. I think the coolest thing about PAP though is we know when one of us is on to something interesting,... and to keep going with it, weather it be one of us noodling around with one sound, one sample, one hook, one vocal line, one beat, someone will say ..hey wait that's cool keep going keep going..and encourage, then we will continue to explore that feeling until it burst out into something we feel is powerful enough to record.

5. Until this date you have released a great debut album which was sold on sliding scale donation basis. Has this way and format proved as good for the debut release? Any chance of releasing it officially under contract?
KH...We think this format of release was a total success...It puts the power in our hands and proves that the harder you work as an artist the better the payback. We are totally responsible for ourselves and our own success. I think that most artists will eventually follow suit. I think we would be interested in working alongside an artist collective type thing, maybe where shared concepts and styles help catapult us into other arenas, maybe to new audiences.

6. Your debut album provides a lot of good new wave energy, it’s quite atmospheric and could easy fit into 1984 as good as in 2014. Now almost a year after its initial release, how do you feel about it? Would you change anything?- ---
Thank you, nice compliment! I think there are probably many things each one of us would want to change, and hindsight is 20/20..the thing is the process from the initial emotion that even drives us to the idea of the song, into a fully developed record ready for the universe, is quite a process for us, but In this record i think it needed to come out exactly as it did. That's where we were and exactly how we felt at the time of conception, and if we could go back in time and change things we would never have that initial gut wrenching thrust. the force that drives us. Going back and changing feelings is like retouching, we aren't against it, but we felt we needed to put the raw tracks out there and not rethink and edit how we felt. We did re record 2 songs from our original demo EP and would up just going back to the originals after all was said and done. They just felt better the first time.

7. Tell us more about your live performances so far? How was the feel a warm and positive reception from your audiences? Any outstanding experiences?
LK We absolutely love playing live. Its a must. Its one of the most magical things about this project. I think our audiences have been incredibly supportive encouraging and honestly, for me very inspirational. I have met so many interesting and amazing people throughout the life of PAP and I look forward to meeting more
KH I think we really surprise people when they see that we are playing everything live, and out of amps. We do not have a laptop or any backing tracks....so when people see how connected we are...they really respond. Our shows are loud, and our vibe still the same as our record...it gets people excited to hear synths turned up and driving our sound through amps...LK delivers her voice on top and creates a unique vibe that people are not used to seeing live.


8. How important is your visual image, does it go ahead the music?-
We think the visual does compliment the music, the artwork we have is a visual interpretation of the sound, and as far as our physical selves, we do in fact love great style, but we all kind of just wear what we feel good in, we are somehow attracted to geometry, vintage things, new young designers that we meet, sometimes our friends make us outfits and that is really the best. I guess i would say the music comes first but i suppose it is hard to separate the two.

9. What music do you listen to if you are not recording your own?
KH...Lately I have been going back in time and listening to The Jesus and Mary Chain. A friend of mine just turned me on to Hala Strana..he blends Eastern European instruments with loops...I love that it provides a different visual for me every time I listen.
LK..I have been into really deep house lately..drum and bass and lush synths with no vocals or minimal vocals..on the opposite side of that, also lately have been listening to my Nina Simon records and early german/swiss electronic/postpunk stuff like Malaria & Grauzone

11. After the debut album release, what comes next? What are the further plans and promotional activities?
We do actually have allot going on! we have a show coming up DEC 14th in Brooklyn at "baby's alright" and, a spring mini tour in the works... some really cool DJs and musicians are working on some remixes of the old fan favorites from the record, we have some songs from the record in a new series coming out after the new year, AND we have a new single we are working on a video for to be released early spring...so we have had our hands full and it feels great.

12. Any plans of coming to Europe and touring outside USA? We are constantly considering Europe...maybe burning flame can put on a festival and invite us to play!? We want to do something in the spring, so we are trying to make connections now.

13. Where can fans gain access to your music?--- Right now its easy access on soundcloud and our website through gumroad. We stayed away from the big distribution to keep things simple and in our control...we felt very precious about this album and how it would be released.
https://www.facebook.com/peopleatparties
https://twitter.com/peopleatparties 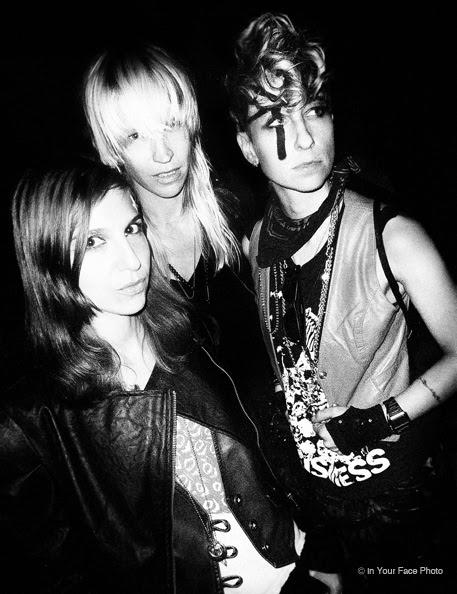 In Conversation People at Parties Q-A