on November 06, 2014
Minuit Machine have already been introduced to our blog during the last month. Hailing from France to some they might be new comers and to the other already a familiar name in Darkwave waters. We decided to catch up with the girls and find out something more about their sound machine. As already mentioned, the duo took shape in 2013 when they released their debut EP. This is a big year for them as they have released their debut album 'Live and Destroy' and they are currently touring an promoting it. Let's see what Hélène and Amandie have to say about Minuit Machine, past, present and future. 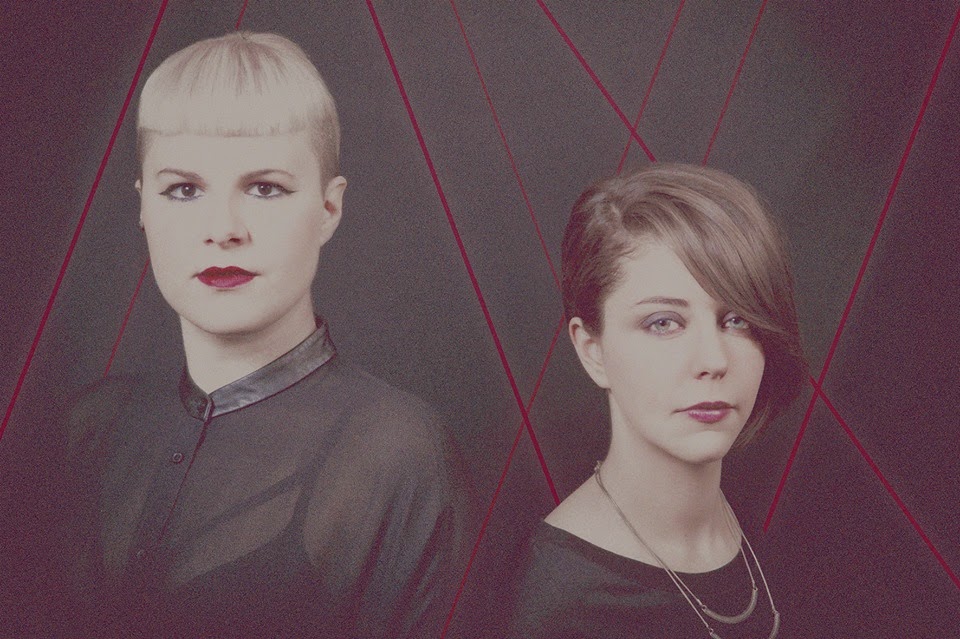 1. B- When I saw your name for the first time for a second I was confused and associated to the classic Moroder’s outfit Munich Machine. Many people might wonder what the story of behind the name Minuit Machine is? Any reference to it?
H - Haha, I never thought about that! There is no particular references to Munich Machine. I was looking for a good association of two french words that would represent the music we play. And it came suddenly one night, « Minuit » means « Midnight » in french and « Machine » is the same word in both language. I can’t really explain why but it was an evidence, the perfect combination.

2. B - Let’s take this past reference to talk about the influences. Is there any particular artist or genre that influenced the music of Minuit Machine?
H - Of course, a lot of bands influence our music, past and present. But when we are composing the songs, it’s something that comes from really deep, it’s our emotions that we’re changing into sounds and melodies. I remember when we played our first gig, someone told us that he recognized the influence of The Human League in our music and I was really surprised because I love that band and I would say that yes, this is one of my biggest influences. But I’m not conscious at all about how people can hear those influences in our music, we don’t even really think about it. But to tell a few names, for me, it would be: Xeno&Oaklander, The Human League, Depeche Mode, The Frozen Autumn, Gold Zebra, Linea Aspera, Tears for Fears, Turquoise Days…
A – Yes, exactly :). I feel like the melodies and lyrics I’m creating now are influenced by all of the artists I’ve been listening to in my life. But if I had to pick a few bands that are always on my mind, I would say: IamX, Metric, Erasure, Depeche Mode and The Cure.

3. B -You mentioned on bandcamp that you both met in 2013 when Hélène was still touring with her band Phosphor. Minuit Machine was born soon after it. What happened to Phosphor?
H - I started Minuit Machine in june 2013 and Phosphor splitted up in november 2013. but there is no link between this two facts. I lived in London during two years and I met Nathalie and Jake there but I moved back to Paris at the beginning of 2013. I was travelling every month to practice or touring with Phosphor and it worked pretty well! After a european tour in october, Jake told us that I wanted to leave the band for personal reasons. It was quite a shock but we totally understood those reasons. We decided that it was the end of Phosphor because we couldn’t imagine the band without him.

4. B- Hélène you have experienced working with a band of three people and now a duo. The musical direction has more or less remained the same. What is different concerning the song writing and performing live? What is the best fit?
H - For me, those two projects are totally different. I joined Phosphor when Nathalie and Jake already released a first EP and they needed someone to play the synth. Little by little, I have been involved in the composition process but for me, it always has been Nathalie and Jake’s project. I learned so much thanks to Phosphor and I’m really proud to have been in this band with those two fantastic artists. But in Minuit Machine it’s totally different, it’s my baby! My sensibilities, my emotions… I can totally express myself. With Amandine, we work in a complementary way, making all the decisions together. But on stage, I would say it doesn’t change anything to be two or three musicians. I’m still playing the synths haha !

5. B- Are you keeping in touch with Jake and Nathalie? Amandine, how about you any previous musical experience? H - Yes but it’s not easy with the distance. Anyway, I follow their musical projects with attention and I am amazed by how things turn out for the three of us.
A – I had my first band when I was 20 years old. We were 4 and our music was a mix between New Wave and Grunge. It lasted 2 years. It was a great first experience but in the end, I didn’t recognize myself anymore in the music we were making. After that, I had several bands, amongst which an electro-rock project.

6. B- Coming back to Minuit Machine. Your debut album ‘Live and Destroy’ is out now. There is this certain dark tone on it. Can you tell us some stories about the recording production process?
H - Generally, I start composing the electronic drums and the bass synth lines. After that, I add some melodic synth lines. I’m working on this melodies until I really feel touched or get emotional… Only at this moment, I know I found something interesting. When the structure of the song is done, I send it to Amandine.
A – When Hélène sends me the instrumental tracks, I listen to them many times so that I can feel the global atmosphere. This atmosphere is what inspires me to create a melody and write the lyrics. My goal is always to find lyrics and melodies that suite Hélène’s synths and electronic beats.
H - After that I mix all the tracks together and rework the whole song until we’re both satisfied with it.

7. B- How do you promote your music, social networks vs live shows?
A – These last years have been very hard for the music business and the new artists. So we believe it is paramount not to neglect any way of promoting our music. Facebook and Twitter are the perfect tools to communicate and make people know our music. Live shows are extremely important too. When we’re touring, we meet lots of people, and it is also a chance for us to prove that we’re a real band with powerful live sounds.

8. B- What music are you listening when you are not recoding your own? With this year’s end approaching any special album you would like to share with the fans? An album you will remember 2014 for.
A – The music I listen to depends very much on my mood. I would say that these days, I love listening to grunge music. A few weeks ago, I was into italo disco, and before, I was into pure 80’s bands like Roxette, The Cure (their old records) and Erasure. I also listen to more recent artists such as Empathy Test and Coctail Twins. I know that Coctail Twins are gonna release an EP soon, and I can’t wait to listen to it. My 2014 album are Oblivion by Ash Code.
H - I’m kind of obsessive when it comes to music. I don’t fall in love often but when it’s happen, I can listen to the same song or album over and over again. Last year, I was obsessed by the album « Sentinelle » from Xeno & Oaklander and the song « Love, french, better » from Gold Zebra. This year, it’s the songs « Deliverance » and « RFLX » from H ø r d and « Losing Touch » by Empathy Test. For the 2014 album, I would say the self titled one from Keluar.

9. B- What lies on the horizon of Minuit machine, beside the live performances and promotional activities, what else is in plan for Minuit Machine?
A – For now, we’re pretty much focusing on the tour but we have lots of plans of Minuit Machine, such as a second album for 2015 and maybe a very special release before… :)

A very special thanks to Amandine and Hélène and to Cagliostro from You Can Utopia blog!