Alphaville's 12" and b-sides to be Released on a Compilation.

on October 15, 2014
German based DJs Blank & Jones continue their long-running so80s (SoEighties) series this October with a new release focusing on German synthpop band Alphaville. Best remembered for their 1984 hit singles "Big In Japan" and "Forever Young", Alphaville released three albums on the Warner label in the 1980s but like many eighties pop bands struggled to match the success of the early records in the 90's.
This new two-CD so80s collection celebrates 30 years of Alphaville and features all 1980′s twelve-inch versions and B-sides, all of which have remastered from the original master tapes. In addition, this comes with a 36-page booklet with rare photos and a track-by-track annotation by the group. Online retailer JPC.de are offering exclusive autographed versions of this new release. so80s presents Alphaville is released on 31 October 2014. 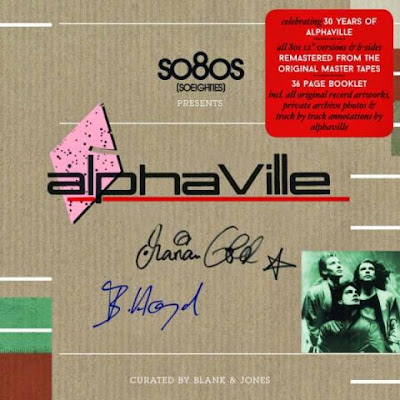