on July 29, 2014
In April this year Minimal Wave released a remastered reissue of Soma Holiday‘s cult classic, "Shake Your Molecules". Soma Holiday was a Franco-American duo consisting of Jean-Marc Vallod (FR) and Jane Honicker (US), based in Williamsburg, Brooklyn back in the early 1980s. They recorded “Shake Your Molecules” along with “Too Many People” and “Art Dimension” in 1984, at Unique Studios in Manhattan. The studio was known for being the first NYC studio with MIDI capabilities.
This new remastered 12" edition features four tracks by Soma Holiday, the original “Shake Your Molecules” mix, the unreleased dub version and two other unreleased outtakes of “Too Many People” and “Art Dimension”, all from their 1984 studio recordings at Unique Recording Studios. Soma Holiday’s Shake Your Molecules EP is pressed on 180 gram oxblood vinyl and limited to 999 copies. Full color gloss sleeve with two sided insert featuring photograph of Soma Holiday in front of their home in Brooklyn and full liner notes with text by Jean-Marc Vallod. Release date: April 30th, 2014. 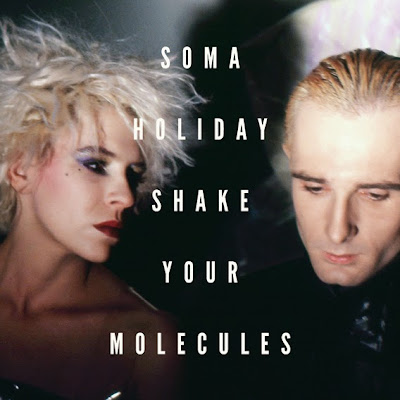