on July 25, 2014
Previous few months, I took some time from blogging concentrating on things in my private life so the blog did suffer and the regular single updates in the form of Singles Round Up weren't updated on the regular basis. If you follow Synthematic you might have heard some of them. For those who didn't, here is the selection of twenty songs, tracks and singles that we think are essential listen for this year. This is part one. Enjoy and please vote for your favorite tune at the bottom of the post. 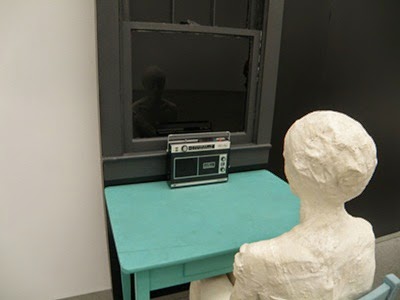 Back in January Eternal Death came out from nowhere. It was not a name that you would immidiately look at by discovering new music. Then I realized it was released by well know Swedish label Labrador Records best known for releasing albums by The Mary Onettes and Club 8 and other good bands. In the case of Eternal Death, the name is not just a name it is also a musical statement. "Life's about dying" says the musician who has recorded one of the best songs in 2014. Even though the motives are darkness, death, noise and strange dreams the melody raves it up touching all senses from head to toe.

"Old Time Glory" seems to be Sarah P' official farewell to the band she spend her time from the early beginning. Sarah is going to focus on her own musical career, while the old band will continue with the new singer. They have also announced the follow up to the their debut album 'At Home' which was released last year. If this hooky synth pop is what the album is going to offer, it certainly allures for more.

New ventures for Jonna Lee began this years or better say continued where she stopped in 2013. Introduced by the song "Fountain", she continues to deliver delightful synthish dream pop wrapped in a nice art package of consistent sculpture of beauty and creativity. Follow up single "Vista" was released in April and the album 'Blue' comes in Autumn. Stick around for that.

Recently we introduced People at Parties as the big New wave thing almost thirty years after its beginning decadence.They are young and fresh, deliver perfect energy, hypnotize you with every beat. It's pop but with avantgarde undergound feel. "Mineral Material" was the first song that got me into them. First few second of the sinister synth lines and I was there. Singer LK Naps voice only completes the listening pleasure blending with the music. If you haven't, be sure to check out their debut album which is out now.

Lust for Youth have pretty much been around in the recent years with their blend of dark and minimal electronic sound. With "Illume" things have changed, the mystery is solved and the new shiny and polished pop is here. This might have given me a small flashback to 1988 and the big opening lines of "Domino Dancing", but then the vocals take the song to the other direction. Their new costume certainly is for wider audiences and we hope 'International' gives them the international breakthrough.

Client are back! Ten years after the original band member and founder Sarah Blackwood left. Did not give high hopes for the new Client when I heard the news, but I was pleasantly surprised to hear the new song. Client have stuck to the original concept the coldness , the uniforms, the drama and the most important the Electroclash which has become rare in the electronic music. The video was directed by Carlo Roberti. Regarding the album, no other stand outs for now.

With years passing his music gets better and more complex and more underrated. 'Waking Light' might be my most listened song of the year and the song I wake up to, I fell asleep and it is my birthday song because it was released then (found out today). A song for the lovers, a lush psychedelia of rhythms and beautiful call back to the 70's. Morning Phase is one of the most anticipated albums this year and marks Beck's change to Capitol.

Violence is a Canadian electronic duo who have released their debut album this year for Visage Musique. One of the lead tracks and the first single is the song "Halo"a relaxing and chilly space synth to drift away to. Generally speaking, their musical concept compromises of sun, niche construction, geometry and chaos. Their debut album is imaginary adventure through ten stations giving a unique experience, named after the German word 'Erlebnis'

The Horrors- I See You

The Horrors are back with the new album 'Luminous' this year. No love on the first listen expect this one song that did stand out from the first listen. New ambient neo-psychedelia is not a stranger to The Horrors fans anymore, as the mood is similar as on the previous album. Long intro, growing guitar driven dreamy synthetic pop. "I See You" is the second single from the album.

Vogue Dots are a new experimental pop duo from New Brunswick, Canada. Did not hear much but this one song "Skinny Thing" that keeps me going for months. They say it's the music of surrealistic edge and synth-based structures. Somehow its dreamy, upbeat summery lo-fi electronic. Their debut EP is entitled "Toska" and is out now. To stream visit their bandcamp page.