on July 12, 2013
A London based Soft Riot is a project of Jack Duckworth a former Vancouverite who has clocked over fifteen years of musical output in various bands and projects. With origins from the mid-nineties in the vibrant art-punk/hardcore dominating the West Coast American/Canadian underground at the time, JJD followed a trajectory through to the revival of synthbased post-punk music just over a decade or so ago, which spawned a number of highly successful Canadian artists out of that scene. 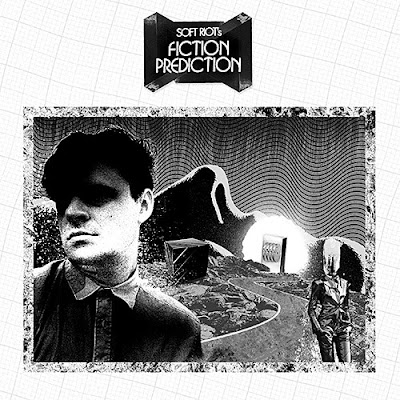 His new album is entitled 'Fiction Prediction' is a collection of songs selected for a first official LP release, these tracks being a confident advancement in the unique and engaging “Soft Riot” sound developed on prior releases. Drawing inspiration from synthesizer-based film soundtracks of yesteryear, drones, early EBM, minimal synth, a dose of psychedelic synthpop and a heavy dose of throbbing appregiated rhythms, Soft Riot is a science-fiction heavy soundscape that narrates the listener through today’s fractured, excessive landscape with hints of black humour Soft Riot, coming from a more punk rock pedigree, often places more focus than the norm on his lyrical content, bringing in detailed pictures and sometimes even linear narrative storylines to subjects such as modern living, technology, surveillance, environment, overpopulation, enlightenment, life elsewhere, forewarning about catastrophic events, vain people in gyms, and not having enough time.
The influences come less from other musical artists but more so from written fiction and film —a future predicted by fiction. Where in past musical ventures the path would be aggression, stomp and noise; Soft Riot takes those energies and experiments more with anxiety of tension and unease. A number of these tracks were released in the spring/ summer of 2012 on the limited edition cassette “Hyperbolic Masses”, which was self-released is now completely out of print.