As a result of the readers' list submissions and voting, we manage to compile the following list: 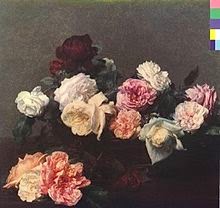 'Power, Corruption & Lies' was the second studio album by New Order, released in May 1983 on Factory Records. It was well received back then and even today it is considered as one of the best New order releases. On this album, the sound of New Order has changed compared to their debut album 'Movement' which was still influenced by Joy Division. In 1989, the album was ranked number 94 on Rolling Stone '​s list of the 100 greatest albums of the 1980s, it was ranked at 216 on the NME list of the 500 greatest albums of all time and it was placed at number 28 on Pitchfork Media's list of the best albums of the 1980s. The Album was reissued in 2008.

2. Tears for Fears- The Hurting [Mercury]

'The Hurting' was the debut album by Tears for Fears released in March 1983. The album featured the hit singles "Mad World", "Change", and "Pale Shelter"– all of which reached the Top 5 in the UK. It also contains a new version of the band's first single, "Suffer The Children", which had originally been released in 1981. in 1999 the album was reissued for the first time and included four remixes as bonus tracks and an extensive booklet which described the recording process of the album. A 30th Anniversary reissue was released on 21 October 2013, in both double CD and deluxe 4-disc boxed set editions.

'The Luxury Gap' was the second and the best selling album for Heaven 17 released in 1983 for Virgin Records. The album featured the hit singles 'Temptation', 'Let me Go' and 'Come Live with Me' which brought the band the biggest commercial success. The band performed the album in its entirety on 14 October 2011 at London’s Roundhouse, the first night featured Heaven 17 (Martyn Ware and Glenn Gregory) performing the album in "3-D sound" developed by Ware himself. It was reissued in 2012 including bonus tracks.

'Dazzle Ships' was the third studio release by OMD. It was a follow up to their most successful album 'Arichitecture and Morality' which turned the OMD sound into new direction. The album is noted for its highly experimental content, particularly musique concrète sound collages, utilizing shortwave radio recordings to explore Cold War and Eastern Bloc themes. Two singles were released from the album, "Genetic Engineering" and "Telegraph", which achieved moderate chart success in the United Kingdom and on American rock and college radio. Although it was the commercial flop, this album has always been praised by the critic and considered as underrated masterpiece.

5. The Blue Nile- A Walk Across The Rooftops [Linn]
‘A Walk Across the Rooftops’ is the debut album by Scottish band The Blue Nile, released in 1983 in Canada/USA and in 1984 in the UK. It was not a huge success upon the initial release, but today it is one of the outstanding albums of this year. Two singles were taken from the album, "Stay" and "Tinseltown in the Rain" reaching only minor success. In November 2012 Virgin Records released two-CD "Collector's Edition" versions of 'A Walk Across the Rooftops' and its follow-up Hats in the UK and Europe, each containing a remastered version of the original album plus a second CD of bonus tracks.


6. Soft Cell- The Art of Falling Apart [Some Bizzare / Sire]

'The Art of Falling Apart' was the third album release for Soft Cell on Some Bizzare/Vertigo. Soft Sell continues their dark voyage through the back alleys of a sleazy city which they started on their debut album, but their sond became more gloomier and complex and commercially they could not reach the success of the previous album’s singles. They released ‘Where The Heart is’ and ‘Numbers’.The album was reissued and remastered in 1999.

‘Porcupine’ was the third studio album by the English post-punk band Echo & the Bunnymen released on 4 February in 1983. It was band’s highest charting album which even reached the US charts. The album featured the singles "The Cutter" and "The Back of Love". A VHS video called Porcupine – 'An Atlas Adventure' was also released containing six promotional videos of tracks from the album. The album is also listed in the 2006 book ‘1001 Albums You Must Hear Before You Die’ and it was reissued in 2009 and 2011.

‘You and Me Both’ is the second and final studio album by Yazoo, released on Mute Records in July 1983. The album featured only one single "Nobody’s Diary" as well as the song Happy People for which Vince Clark took over the vocal duties. Even though not originally planned for release, the album managed to chart and even reach number one in some countries. Some critics even consider this to be the better album than their debut. In 2008, the duo made a small reunion for a small tour and as a result, they released 'Reconnected Live'.

‘Construction Time Again’ was the third album by Depeche Mode released on Mute in 1983. This was the first album to feature Alan Wilder, who also wrote two songs. The album was recorded at John Foxx's Garden Studios in London, engineered by Gareth Jones and mixed at the Hansa Tonstudio in Berlin. It featured the hit single "Everything Counts" which is still one of Depeche Mode’s all-time hits. The Album was reissued as collector’s edition in 2007.

‘Head over Heels’ is the second studio album by influential Scottish rock band Cocteau Twins. The album was released in October 1983 by 4AD, and was their first album as a duo of Elizabeth Fraser and Robin Guthrie. The album featured the brilliant tune "Sugar Hiccup" which was also the debut single for the band. In 2003, the album was named one of the most eccentric British albums of all time by Mojo magazine. The album was reissued in 2009.