on November 03, 2012
Back in September we introduced the Australian/American industrial pop duo WAZU. Since their formation in 2010, they were building up their distinctive music style which tends to be alternative and pop at the same time mixing electro and rock with high level of a dark tones. Earlier this week, on Halloween they released their debut album 'Robobo' and they  are currently touring the USA. On top of all this, here is our very special WAZU interview where they reveal more about the band, their influences, their debut album and more. Enjoy! 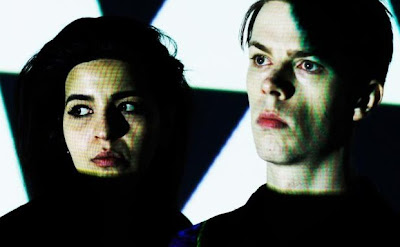 1.WAZU was formed 2010 and have been around for quite some time. Who is the driving force behind the music of WAZU?
We both are. We have our roles as far as the writing, but generally that’s just a process that we go through. The inspiration part, well that comes from both of us living our lives and having our eyes open.
2.Where did you first meet and when did you decide to do music togehter?
We first met at music college, and we decided to start making music in a death metal band. I (Matt) played drums and Rizz sang lead. It was a pretty spontaneous thing, but our chemistry was obvious and we went from there.
3.Which artist, band or genre has influenced your music?
That’s hard to say, exactly. We have a lot of extra-musical influences like certain films and film composers. Philip Glass, Giorgio Moroder & John Barry for instance. But musical artists, David Bowie, Bauhaus, Suicide, Front 242, Depeche Mode…. Then there’s the less stylistically direct ones like Kate Bush, PJ Harvey, Talking Heads and such.
4.You are originally from Australia and this is where you started making music. What other bands or musical projects were you invloved in before starting WAZU?
We both met at music school so we played around in a lot of College bands. I had started an experimental surf-rock band called Captains during high school that Rizz later joined so there was that. Rizz was composing sound design pieces for art shows and fashion runway shows with her college friends. We were always in about 4 or 5 different not so serious bands with our friends for fun. It was a period for experimentation.
5.When did you decide to move to New York and how did the New York's music scene affect your music?
We decided when we were in LA to move to New York. That was 2010. The New York scene hasn’t affected our music much...we tend to make the same music no matter what’s around us. We kind of can’t help it. But we have seen a lot of things in our time in the US that help give us material or inspiration to write about. Some of it has just been living our lives here and going through what we do every day.
6.You full lenght debut album 'Robobo' is out on October 31st. This is you second release for this year and a follow up to your self titled EP. Is the EP the introduction to the album or can we expect different sound on 'Robobo'
It’s the same band, but the sound is a little different. We wanted to maintain the urgency we had on the WAZU EP, twist and refine the darkness, but add some pop to it. We’re huge pop fans, from Cindy Lauper to 2Unlimited.
7.What can you tell us about Robobo, the album title, song topics and the release date?
Robobo just means what it sounds like. It’s a name, just like you would name your kid Simon or Rachel. The song topics are meant to be open to interpretation... they all mean something to us, but the point is it’s up to the listener to create their own meaning. I get a lot of inspiration from relationships, but a lot of it is larger than that, and also a lot of it’s metaphorical. With the release date, we just circled the scariest date on the calendar.
8.You recently premiered the video for the song Councillor on 'Vice'. Will this song also be released as a single? Any other outstanding tracks on the album?
Yes, that’s the single so to speak, and obviously the video, but as far as releasing it, it’s just part of the album. Other tracks - we like It’s a "Trick", "Symbol System", and "Bones", but it always changes and there’s plenty of stuff to choose from on there so I wouldn’t want to play favorites.
9. What music do you listen to when you are not WAZU. Any favorite albums so far this year?
Rizz has been getting into Belgian Electronic Body Music, and I’ve been getting into random stuff, actually rediscovering some of my old stuff that I never got into that much. Utah Saints, Boyz 2 Men, Arrested Development, The Shamen… And for some reason we’ve both been playing The Prodigy a lot.
10. What is your favorite source for new music?
Don’t have a favorite really. I’ll get it from anywhere. I’m pretty pragmatic about how and where I get it.
11.Any tour plans and further releases and future plans in music?
Just about to start an Eastern tour in a few days which will take up all of November, then we’ll be touring again for as much of 2013 as we can. We’re always writing, so a new release is not too far around the corner.
12. Where can fans gain acces to your music?
www.wazuband.com, or on itunes worldwide.
https://www.facebook.com/wazu 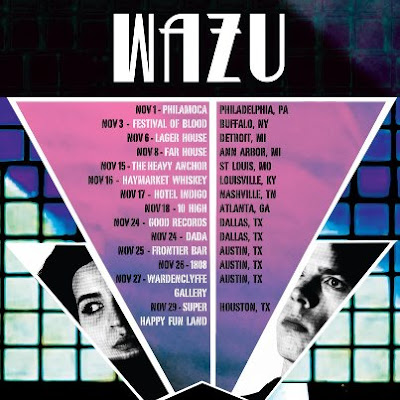