Josef K- Sorry for Laughing the First Ever Vinyl Reissue

on October 28, 2012
LTM presents the first ever vinyl release of 'Sorry For Laughing', the legendary first album by cult Scottish guitar group Josef K, recorded for Postcard Records but destined to become the great ‘lost album’ of the post-punk era.
Recorded at Castle Sound Studios (Edinburgh) in November 1980, 'Sorry For Laughing' should have been issued as Postcard 81-1, but was shelved after the band and label boss Alan Horne decided the 12-song set sounded too polished. Perhaps two dozen white-label copies in unmade sleeves exist, and have sold for as much as £1,000 amongst collectors. Josef K issued their second stab at a debut album, 'The Only Fun In Town', in July 1981 – only to split after completing a promotional tour.
This remastered vinyl-only edition of 'Sorry For Laughing' replicates the original Robert Sharp artwork (a solarised portrait of the band atop Calton Hill, printed in silver pantone), with detailed sleeve notes on the inner bag, and the added bonus of a 12 track CD, The TV Art Demos, featuring all tracks from the band’s very first recording sessions in 1979. The remastered edition is due for release on November 26th through LTM Recordings.
http://www.josef-k.org/news.htm 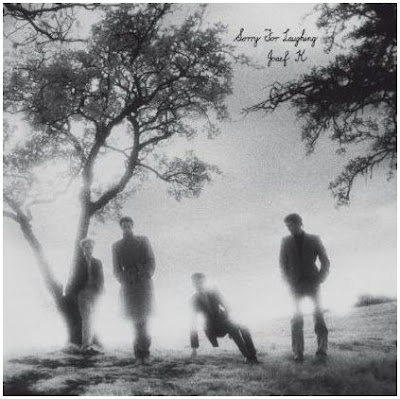