Out This Week: Clockwork Orchestra- Friends Without Names

on September 26, 2012
'Friends Without Names' is the exciting debut album by Clockwork Orchestra (aka Irish songwriter Paul Mangan) set for release on White Label Music, an independent record label based in Windsor which is co-run by Ann Shenton, a founding member of art rockers Add N To (X).
A chocolate box of melodic treasures, the album was recorded entirely within the confines of Mangan's bedroom studio and demonstrates his love of nursery rhymes, vintage keyboard instruments and lyrical storytelling. 'Friends Without Names' takes the listener on a unique journey through a frenzied world of vibrant colours, songs within songs, eccentric characters and chronic symphonies.
The live incarnation of Clockwork Orchestra have recently returned from performing a series of shows in Germany and have an album launch set for November 3nd at the Twisted Pepper in Dublin to celebrate the release of Friends Without Names on compact disc. The digital album is released this week. 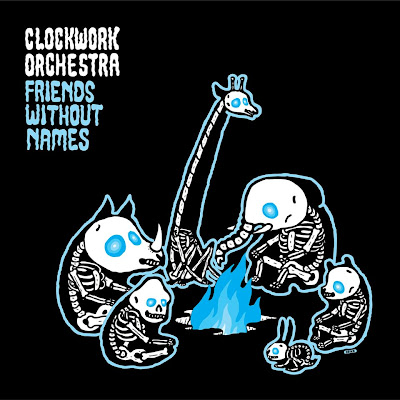