on September 25, 2012
Detachments is the creation of London-based musician and songwriter, Bastien Marshal. Along with drummer, Peter Dawson, and a cast of musicians and producers, Marshal has been the driving force behind the band since the mid-2000's. The sound is an intoxicating blend of 80's post-punk, synthpop, new wave, and even hints of darkwave in some places. Not to be clumped in with the wave of bands recreating these sounds as of late, Marshal and company do it very well and with an ultramodern feel in tow. The listener is mentally, physically, and rhythmically drowned in mood, atmosphere, and all that tugs at the heartstrings. Following a string of singles, the band released their self-tilted debut LP in September of 2010.
Largely produced and performed by Marshal, Dawson, and producer James Ford ( Simian Mobile Disco), it offered more synth driven reworkings of previous singles as well as new and unheard tracks. Since that release, Marshal and Dawson have been touring, intermittently, to further promote the album and band while gaining many a new fan along the way. On September 3, 2012 the digital release of the "Fade EP" saw the light of day on UK-based Hacienda Records. The label has mainly been a vehicle for the output of Peter Hook (New Order / Joy Division) and are now taking on the task of releasing the work of new and established artists. With a follow up LP in the works, where will we see the band go from here? Who better to ask than Marshal himself? He kindly agreed to answer a batch of questions that i happily whipped up for him. 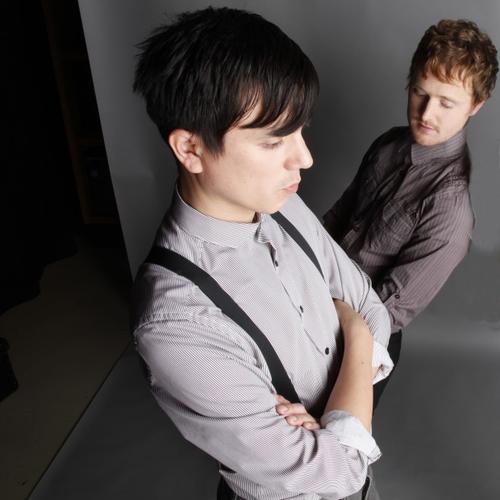 1. Can you give us some insight as to why you chose the name, Detachments? Is there any correlation between the name and your sound/lyrics?

Detachments means all of those things. The military edge gave us a sense of discipline and action. The detached, minimal approach of some of the lyrics e.g. HAL is symptomatic of intermittent misanthropic, nihilistic tendencies. There's also a Zen philosophical aspect. In many ways the more recent years of my life have seen me reject standard society to achieve a kind of state of detachment. It's quite a versatile word isn't it. The cold sound we have is in itself detached.
Just looking throughout the album...

“Audio/Video” – it's about a guy being isolated/detached from society, relying on technology and home entertainment.

“I Don’t Want To Play” - is about the desire to detach from the rat race and reject petit-bourgeois protocol.
“Art of Viewing” - is about single-handedly misusing Remote Viewing spying technology for romantic reasons.

“Holiday Romance” – it's about separation.

You Never Knew Me”– it's about cutting off an old close friend, whose ideals have changed.
“Sometimes” - is about the thrill of the idea of self-destruction and also messing about with smack (probably the most detached, insular of all drugs).

“H.A.L.”- is about media/government information manipulation.

“Circles” – is about a desire to detach from the rat race combined with being sick of being involuntarily preoccupied with lost love.

“Fear No Fear” – Zen detachment hurtling through deep space, somehow surrealistically combined with the will of Napoleon (I'd recently visited his tomb).

“Words Alone” –  is about atonement for an ex.

“Nothing You Can Do” – obviously about a separation, but from an observers point of view.

“Morning Light” – is about ushering in a radically new personal era after departing an old one.

“Until You Fadeaway” – reminds me of the grey/brown winter seas of Lancashire, being there alone...an 18 year old dreamer.

So yes, they all do actually involve “detachment” in some form or other.

2. As mentioned earlier, the "Fade EP" finds you settling into a new home on Hacienda Records. I'm aware that all of your previous releases were through THISISNOTANEXIT Records. Why the change in labels?

TINAE ran out of money. They're not releasing any more material for the foreseeable future. It's great being associated with Hacienda, that club meant so much on a lot of levels.

3. What influened the sound of the new EP? On the third track, "Until You Fadeaway", there's surely some New Order/Joy Division influences there. Was this an unofficial homage to those bands? Did it have anything to do with your past performance with Peter Hook or your covers of the aforementioned bands tracks?

I actually wrote that track years ago when I still lived in Blackpool and its first demo was recorded before Detachments even had a name. It seemed appropriate for The Hacienda release though. It is almost homage to the Fac lineage we have become part of. Each track on the "Fade EP" says 'fade away'  in the lyrics at crucial positions. Some people might think it's us toying with the idea of actually fading away as a band, quitting.

4. Who influenced you, musically, while growing up? Are there any particular favorites from the past or are there any current favorites?

Pet Shop Boys, Depeche Mode, New Order, The Cure, and Joy Division, when I was at high school, all part of my DNA. I started clubbing and got into classic House, Techno, backtracked to Acid and Rave, Aphex Twin, My Bloody Valentine, Krautrock, etc at 6th form and art college. Current favourites are John Maus, Ariel Pink (the only downloads I've ever paid for from iTunes are by those two), The Knife, and These New Puritans.

5. Tell us about your relationship with Andrew Weatherall. How did that come about?

Ah, well we sent demos out back in 2002. R3mote was the group at that time. Andrew phoned us up at work and we were gobsmacked. What like The Andrew Weatherall?! He signed R3mote to RGC, put out the "Remotion" EP in 2003. Used to go round his studio now and then 2002-2006 having a smoke to e.g hanging out on New Years Eve one night with him DJing round the clubs, ending with a set at Fabric.Those were good times and more recently he's DJ'd at Detachments gig and remixed "H.A.L.".

6. You've done quite a bit of touring since the debut album. Playing various UK and European locations, is there any particular country you feel gave the best reception? Are there any future plans of shows in the US?

Athens was fucking great! Afterwards we sold out of all merchandise, totally. Stockholm went off too, crowd bouncing off the walls. Leipzig, in eastern Germany, was a good one, kids going nuts stagediving and singing along. France receives us well. Nothing is set for US but would love to go. There's been hints at maybe some west coast dates, NYC would be good too. We have to wait for an approach.

7. Going more in depth in regards to touring, what types of changes are brought to your songs when performing them live vs. the album versions? Is there a little more or a little less of any particular component?

The drums are live courtesy of Pete Dawson. He's got skills and usually prefers an acoustic kit but sometimes uses electronic. Bass guitar is played on the tracks using that instrument. Things are a bit more raw/punk live, vocals sometimes slightly more raucous depending on how long I've had exposure to alcohol.

8. Through promo videos and performance clips, one will notice changes in the lineup over the years, yourself of course being the mainstay. Was your initial mindset that Detachments would be focused around the songs of Bastien Marshal? Was there an understanding between yourself and past members that their involvement could or would be a temporary arrangement?

Our first management co. wanted to sell us as a "band". I never felt completely comfortable with that and I predicted there would be problems. The mgt group got fired. The original guy I asked to be in Detachments got ousted by 2nd drummer Pete (Oct 2008 – present) and Max (occasional bass player is now back in his native Belgium). There's been a lot of various players in the cast. People think I like to fire people. Don't know if that's true, but we've had 2 mgt cos, booking agents, promo people, and musicians all fired. A couple of guys were sort of inched out after we recorded the album just with me and Ford, no one else required. Ha, I guess Detachments is a bit like The Fall – revolving door policy. Detachments by name detachments by nature.  Maybe I'll just fire myself one day.

9. Do you remember the first record you bought with you very own money? Are you a collector of tangible music?

First record was "Lovesong" byThe Cure. I've got loads of second hand vinyl including gems like Blue Monday (from a charity shop) and Human League's 'Reproduction". I don't get as many hard copies these days though I must admit.

10. And finally, let's talk about the upcoming LP. Have you settled on a name?  Will there be another EP or single preceding it?  Will there be an outside producer or will you be producing it as you did with the "Fade EP"?  What can we expect in contrast to the debut album?

Recording the debut album, with Ford, was a masterclass in production. I learnt a good working process, that can't be taught through words. The next album will be produced by me. We're thinking of releasing it on our own label and not even using iTunes or any other corporate outlet. People can download it directly from us, only then will we be truly independent. Also, we might actually distribute it in South America first and the rest of the world can have exports. We just got a distribution offer from down there including a tour.

The guitars of the" Fade EP", i like to think represent an intermission in the Detachments sound story. The next chapter will see a return to our default, more synth type sound but there will be more guitars than the debut album. The new album will be darker and more strange. Was thinking about calling it "Weird Knights" but not sure. Me and my old mates, day after the night before often used to say e.g. "what happened last? Fuckin 'ell, it's all fragmented - was a bit of a weird night."