on July 02, 2012
Featureless Ghost is an Atlanta based synth-pop duo consisting of Matt Weiner and Elise Tippins. Performing and recording music together since 2007, Matt and Elise relocated from Brooklyn to Atlanta and spontaneously formed "Featureless Ghost. The music of Featureless Ghost gives a new landmark to the dark electronic synth-pop with their retro futurstic sound driven by analogue synthesizers and electro beats complemented with visual aesthetics and vintage collages.
The prolific duo has released 2 full lengths, 3 singles, and an EP. They have releases on Crash Symbols, Ruralfaune, and Double Phantom Digital and just released a cassette EP on Night-People. This will be followed by a vinyl LP this summer (2012), also on Night-People records.
Find out more about Featureless Ghost and hear what Elise and Matt said about their musical influences, live performances and future plans in music. 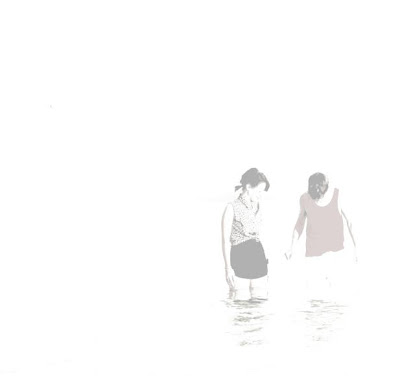 1.Where did you first meet? What was it like when you both decided you could make music together?

M&E: We first met in high school art class, but didn't start recording music together until a few years later. We were involved in some other projects and collaborations before forming Featureless Ghost in January 2011. When we first started playing together it was pure experimentation, we just plugged in a bunch of electronics in different configurations and turned knobs and made crazy things, sometimes playing clarinet or drums or synth or bass or guitar over it, and we just kept refining it from there.

2. What is the story behind the name Featureless Ghost, and what are the main themes and topics of your songs?

M&E: Featureless Ghost is a concept we picked up on from reading, thinking about, and talking about identity: the spirit-ghost, and the information net. Our songs definitely come from this space.

3.Which artist, band or genre has influenced your music?

Matt: Our music is influenced by a lot of different stuff, but it most directly pulls from a lot of minimal synth, 80's and 90's house, techno, synthpop, and more ambient leaning stuff.
Elise: I come at it from a lot of angles – we definitely draw from dance music and minimal-synth in mood and instrumentation. We are influenced by concepts of memory, identity, and time in our lyrics/vocals.

4.How is your music related to your visual image and artwork? What comes first?

M&E: In most cases the music is made first. Songs generally suggest certain visual moods so it is usually easy to start with the music. They are all a part of a general aesthetic or lens. The videos are an experimentation process like the music. We see them as effective transports.

5. You have released two albums, three singles and one EP for various record labels. They were available digital or on tape. Is releasing albums on tapes some sort of a new DIY affair, new trend for richer listening experience or just label's choice?

M&E: Several of the labels we've released music on are predominantly or exclusively cassette labels. In the USA, the resurgance of the cassette tape in DIY culture has been building momentum in the last 10+ years and we rather like it both as a physical object and the way it sounds.

6. Can you describe the recording process for a new record? How is everything set up?

M&E:With the exceptions of "Projections" and "Biologically-Sound Cyber-Bodies," the recording prcoess is identical to the live performance. We write everything on our live rig (which doesn't include a laptop) and try to limit ourselves to things we can pull off using what we have infront of us. We do have a few synths and drum machines in the studio that we don't use live and will sometimes pepper the recordings with them or sample them on the MPC to trigger as we need. Synths are both sequenced and hand-played over the drum sequences written in the MPC and vocals and keys are performed.

7. You have recently moved from Brooklyn to Atlanta. What made you guys want to re-locate knowing that Brooklyn has one of the best music scenes in the world. What does Atlanta feel like for a change?

Matt: We lived in New York City for 6 years and it was great. There were a lot of extinuating circumstances that necessitated our move back to Atlanta and we were regretful at first but I think it turned out for the best. It is important as an artist to spread a different way of thinking or approach to sound, and to continue to do so in a city already so saturated in people doing that didn't feel right after a certain point. I grew up in Atlanta and I feel like the city has a lot of potential for propping- up a strong synth scene. It feels good to be here doing our thing and having it be well received and meeting other people around town doing awesome things. Elise: We moved to Atlanta in 2010 after having lived in New York for 6 years. We didn't really have a scene in mind when moving. It was more of a personal direction. Atlanta is a beautiful city with a lot of affordable living space. We've really enjoyed living here and working from our home studio.

M&E: Our live set up is the same as our recording set up for the most part, the mpc, a few analog synths, 2 mics, some effects processors, and mixers. All we're trying to achieve is the most visceral possible experience for both ourselves and the audience. Lately we prefer the stage; the feeling after playing a good show is hard to beat. We love recording too, getting really deep into an idea and then stripping it down to it's essentials, so it goes back and forth, we love them both.

9. How does music affect you and the world around you?

M&E: We couldn't imagine life without music, and listening to and making music is what we spend most of our time on.

10. What are you guys listening to right now, what bands have you been into as of recent? Favorite album of the year so far?

Matt: I never really choose a “favorite,” but this year has been really good for music. I've really been enjoying the releases from quite a few labels this year, including L.I.E.S., Domestica, Night-People, ClanDestine, Echovolt, Minimal Wave, Other Heights, and too many more to name here, but it's hard to go wrong with most of what they're releasing.
Elise: I'm with Matt on this one, its been a good year for music so far. Lots of cool stuff in all areas. I am constantly drawing inspiration from new and old things alike. Things inspire me differently w/each listen even.

11.What are your future plans, anything exciting on the horizon of Featureless Ghost?

M&E: We just dropped a mixtape we produced on UUU Tapes (June 12th), it's gonna be a headscratcher for anyone who is expecting our usual style. We went waaay out on this one. Further down the road, hopefully sometime in August or September, our LP will be available on vinyl via Night-People. We're currently planning to tour the West Coast with Wet Hair in September, but in the meantime we'll just continue writing and recording music, making videos, and playing shows in and around Atlanta.


12. Where can fans gain acces to your music? 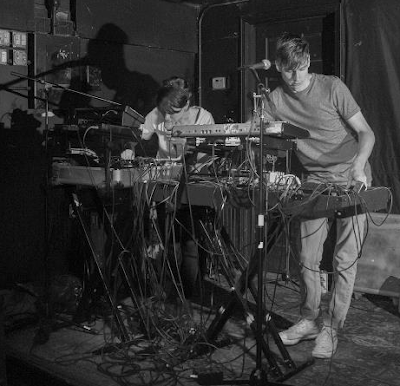