on May 31, 2012
Here comes the May music box packed with the selection of best singles released during this month. The Irrepressibles are back with a new single "Arrow" to be taken from their forthcoming album 'Nude' released on the October 1st. You will not have to wait that long for the new albums by Twin Shadow and Metric as of both album 'Confess' and 'Synthetica' are announced to be released in June. Their new singles, Twins Shadow's "Five Seconds" and Metric' "Youth Without Youth" were released on the May Day. "Kill" is just another chapter for iamamiwhoami on the road to the new album 'Kin' which is out next month. Saint Etienne and Niki and the Dove have both released second singles from their latest albums. Saint Etienne reveal cheerful synth-pop with "I've Got Your Music" while Niki and The Dove deliver electro harmony with "In Our Eyes". Men Without Hats release their first single after the re-release of "The Safety Dance" in 1995. The new single is entitled "Head Above Water" and it is featured on their latest album 'Love in The Age of War' out now. Dexy's Midnight Runners who shortened their name to Dexys return with their first single in ten years entitled "She Got A Wiggle". The Russian electro pop outfit issue "Fantasy", their first release since 2010 and the german dance-pop queen Sandra reveals her latest single "Maybe Tonight" which was produced by Blank and Jones. Last but not least, the finish group Pepe Deluxé release their second single and will certainly put you on your feet with the "Go Supersonic".
So much to dance to in May. Get on your feet!
See you in June with the new singles selection. 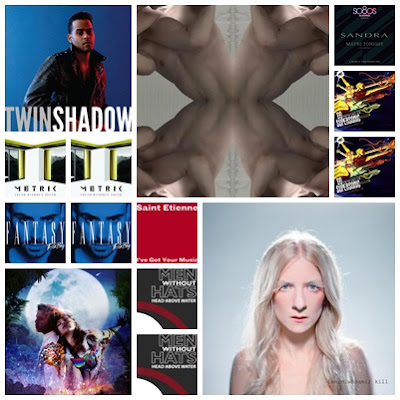