on March 01, 2012
Following the recent news about hard Corps reissues on Minimal Wave records, we got in touch with the one of founding members of the group Clive Pierce who agreed to do an interview for our blog.
Hard Corps were formed in 1983 after years of experimenting with music. The three originators of Hard Corps were Clive Pierce, Hugh Ashton and Rob Doran and they were joined by the French born singer Regine Fetet. Hard Corps released their first single "Dirty" on Survival Records in 1984 and also contributed two sessions to Richards Skinners Radio One show. They were later approached by Martin Rushent and Daniel Miller who worked on their next few singles which were released during 1985. During their musical career, hard Corps supported the Cure and Depeche Mode during their tours in the 80's. In 1990, the group released a compilation of their material before disbanding. This compilation was released on both vinyl and CD, each featuring slightly different tracklists, though encompassing most of their discography, assorted remixes and rare b-sides aside.
Find out more about the group, the interesting facts you did not know, their influences, the recent reissues and much more. 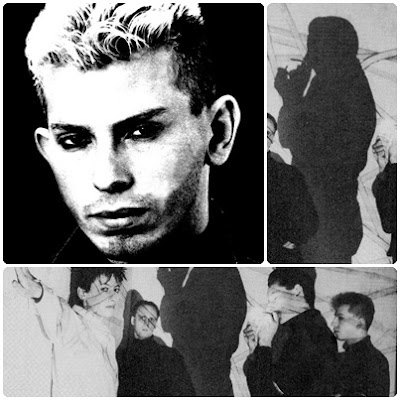 5. What do you consider as a highlight in the music of Hard Corps?
If you mean which track I consider to epitomise hard CORPS the most, I would have to say Metal and Flesh...as it's linear format and structure really was totally free spirited and intuitive.
6. Where are Hard Corps today, do you still keep in touch with the other guys from the band?
Very sadly Regine is not with us anymore. She passed away in 2003 after battling ironically with breast cancer. Hugh still resides in his fantastic Victorian house in Brixton, the spiritual home of hard CORPS. After hard CORPS Hugh was in SunKings. Rob now resides in Peterborough and enjoyed success penning advertisement music most notably for Castrol GTX oil amongst others. I live in Reigate and have been working for the last 20 years in the exhibition industry. By night you will find me in my studio at home or on location somewhere locked away in a hotel room polishing up my latest gem.
7. Are you still involved in making music?
Yes very much so. It is not something that can ever leave you. I always question what the motive and driving force is that keeps me up to the early hours in my home studio when I should be sleeping. I think I know now and I think most people if they can be honest with themselves do too. It is the quest to leave behind sound trinkets that will be proof of my/our existence on this planet long after we have left in body and soul. Just a small object of beauty, just one little golden nugget for someone to discover one day. Right now I am part of a project called Medora.. Not a group but an environment in which to unite grass roots, raw soul and passion ....We go and find these gems from either resources close to home or by trawling the Internet absolutely anywhere to locate and take them back to Medora where we endeavour bring out a little more brilliance in them and hopefully hone them into a something even more magnificent. You may be forgiven if you think I may have a slight mental issue the way I talk about gems, treasure, beauty etc....but for sure it out there just waiting to found. I know so as I have found several gems already....The girl who sings into her I-phone on her lunch break, in the bathroom, in the kitchen and just before going to bed. She sings from deep in her heart and with such passion I have sat and cried tears of joy listing to her. She is not a wannabee...she is just an enthusiast. So natural and unforced Then there is the Greek dentist....this chap just churns out riffs so against the grain and in a way so unique he doesn't even know how good he is. He is not a professional musician... and that is what sets him apart from the rest, what he comes up with has an honesty and an oddball edge that I champion. Then there is Ona/She.....She is not a vocalist but she can still make a compelling sound and atmosphere when ever she opens her mouth. Her first ever vocal was the remake of For Pleasure, she had never ever sang before.....Then there is Phen...Trucker by day music maker by night. He has never made a record in his life but by god has he taught me a lot, Then there is Jaymes Fenda....a pop singer from 1964. He is retired now......like hell he is....he can still croon whenever called into service. The list goes on and will continue to grow. We definitely are living in a fantasy world, but that is what music is all about isn't it? We proudly call our fantasy world "Medora".
I also find myself being frequently asked to remix other peoples tracks which I absolutely adore doing.
8. What is your favourite album from the 80’s decade?
Well aside from Kraftwerk's "Computer World" which was an education, My Life in the Bush of Ghosts by Brian Eno and David Byrne really was an album I used to always go back to and learn something new from and Grace Jones " Night Clubbing".

9. Do you find time for new music and what do you usually listen to these days?
I must admit I'd rather make music that spend time listening to it, but when I do listen to some then Portishead and Dead Can Dance are never far from hand.
10. Minimal wave records have recently reissued rare and unreleased Hard Corps tracks. Can you give us more info about this record?
Well, it all came about a year and half ago actually quite by chance. I was just minding my own Facebook business when up popped a friend request from a Lorene Simpson on my account that I had just really opened to keep contact with family. She said she was a fan of hard CORPS and also involved in the Minimal Synth community while also being one half of a group called Violet Tremors She told me that hard CORPS tracks were quite often posted up on the Minimal Synth group on Facebook and she suggested it would be beneficial to myself and to people who liked hard CORPS, of which she said there were many, to get involved. I must admit to having never heard of Minimal Synth/ Cold Wave etc nor ever considered myself or hard CORPS as belonging to any specific genre other than the one we created for ourselves all those years ago but when investigating some of the material being passed around could easily see that we were in fact loosely of that ilk. Lorene's introduction into this arena lead to me being contacted by Imi Vegh. During a conversation with him I mention hard CORPS had some unreleased tracks that we planned to release sometime...he said he knew two people who might be interested in that news and would contact them for us. Within the space of 10 minutes we had both parties come in with a strong interest ..one for the hard CORPS back catalogue and the other for the for the unreleased tracks. For a time it did not seem wrong in least to court them both but as things developed so the goalposts were starting to be moved...so much so that at one point they both were almost wanting the same set of tracks. It was an awful dilemma to be in as we liked both parties. We found ourselves having to make a very hard and cold decision as to who we were to go with. Some feelings were badly hurt and it unfortunately looked like we had been playing one off the other. This was never the case as we even suggested, perhaps naively, that they both get together on a deal with us. It was an absolutely impossible situation be in and something we don't want to let happen again. So here we are today and looking forward to the release of "Clean tables have to be burnt" that will feature previously released material plus two tracks that never saw light of day in any format to date.
11. Where can fans gain access to your music?
The album will be available through Veronica Vasicka's Minimal Wave label, we also have "Dirty" our first single available on Minimal Wave Tapes Vol2 . A dub version of Je suis Passee is available on Trevor Jackson's Metal Dance compilation. The original Metal and Flesh album is available through Itunes.