on January 18, 2012
Due to the outstanding success of the first “Rewind Scotland – The 80s Festival” in Perth during July 2011, the festival returns for the second year in a row. As with last year’s unforgettable concert performances and audience participation celebrations, this year’s Rewind Scotland boasts another massive live outdoor line-up of the crème de la crème of 80s recording artists/performers.
Tickets go on sale to the general public at 9am on Friday 20th January. Full details on ticket outlets and prices are available from the website www.rewindfestival.com. This year’s line-up is headlined by Ali Campbell’s UB40 and Holly Johnson. Other highlights include a rare appearance from Village People, Scottish icons Midge Ure, Jimmy Somerville, Altered Images and Average White Band, as well as the reformed original line-up of Five Star, Squeeze, Lightning Seeds, Marc Almond, Chesney Hawkes, Roland Gift and many more! 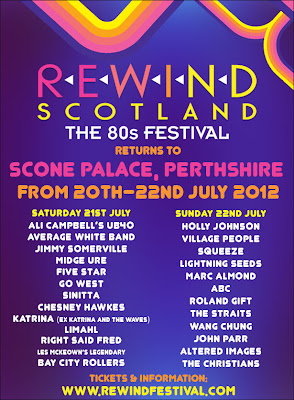 As in 2011, the organisers have announced that Rewind Scotland will once again take place at the historic setting of Scone Palace in Perthshire – the home of The Earls of Mansfield and the crowning palace of the Kings of Scotland. The festival takes place on the weekend of the 20th-22nd July and, as well as the massive line-up of 80s artists, features loads of other festival fun from Silent Discos to Live Karaoke bars along with Camping and Glamping (Glamorous Camping) options.