on January 26, 2012
Our first monthly round-up of the best single releases is here. We already gave you some updates on Limahl who returned to the music scene with the brand new single 1983. Five years have past since the release of 'Wincing The Night Away' which was one of the best albums in 2007 for the Shins, they are back now with the brand new single "A Simple Song" which announces the new album 'Port of Morrow' which is due to be released in March. The French electronic duo Air are back with a new single "Seven Stars" which features Victoria Legrand, new album coming up in February. Goldfrapp have released "Melancholy Sky" which is one of two new songs on their first best of Singles compilation album. Florence and the Machine have released "No Light, No Light", a third single from their second album 'Ceremonials' which was released last year. School of Seven Bells have released "Lafaye", a new single which is available digital. Last but not list, Saint Etienne are back with their first single in seven years. It's entitled "Tonight" and it is, as they say "All about the primal and atavistic pull that all good pop music exerts". Don't forget to leave your vote! 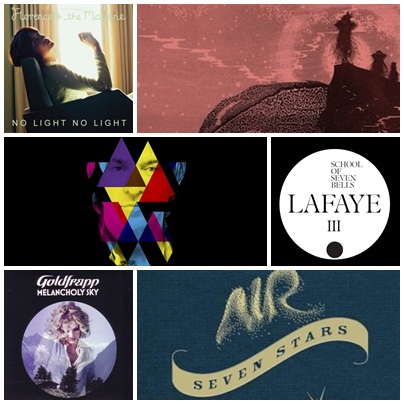