In Conversation: The Silent Section

on December 20, 2011
The Silent Section is a three piece group from Denmark consisting of Nicolas Calrsen, Morten N. Carlsen and Morten Møllebjerg. Their music is balancing between sensitive and fragile expression to powerful and noisy rhythms. They are one of the finest acts on the Danish label Tryghed & Tristesse through which they released their debut album in 2009. Their brilliant new album entitled 'Contour of A Passing Dream' was released this Autumn. In an exclusive interview for our blog the lead singer Morten N. Carlsen reveals more information about the musical background of the Silent Section, the influences and further plans in music.

01 The Intoxicated Joy by Tryghed & Tristesse 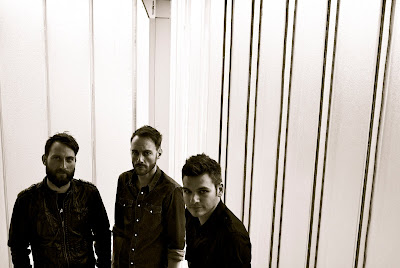 1.What inspired you to take the name Silent Section as a group name

It was through my work at the local hospital I came up with the name for our band. At the department there was this mystical silent-section where no one really knew what went on. We also thought that the name The Silent Section seemed broad – and a name that wouldn’t keep us locked up in a certain style. The name has given us an opportunity to take our music to many different places. Last but not least, we all thought it sounded good and worked as a contrast to the rather noisy music we play.

2. What is your musical background, how did you guys start making music together?

Actually we started more or less from scratch. We shared an interest in music since childhood, but at the time none of us had played music in more serious manner. The music Nicolas and I listened to in our childhood home (we are brothers) were popular of Danish rock and pop musicians and songs from the Eurovision Song Contest. When The Silent Section was formed in 1999, Nicolas sang in a local band that most of all performed cover songs. Earlier he had also played a bit of drums but never live. Morten Møllebjerg and I who met in back in 1997 had at the time no experience in playing or performing. All three of us were very much into punk and post-punk and with our minds set to the punk ideology, which claims that “you should start playing even though you don’t have the skills”, we began playing music. The most important things to us were the feeling, the nerve, and the engagement. We did not have a certain goal, but we all really wanted to play. We shared big dreams and believed that we could go far. We started out playing cover songs over the first couple of years. As we learned how to master our instruments we began to write our own songs and we developed a style that sounded like post punk. I remember the first years as a struggle. First of all we were not good musicians and secondly we struggled to arrange the songs and we used great deal of time making it happen. Furthermore we had to play on rented instruments from the local community centre. Very few people thought our musical project was a good idea and it was so difficult to get an opportunity to play live. I remember the first four years as being frustrating and filled with anger towards the world and also between us members within the group. The turning point came in 2003 when we mailed a copy of our first demo to Peter Peter (founding member of Sort Sol and at the time front man in the band The Bleeder Group) and asked him for his opinion and some advice. We did not really expect an answer, but after a few days we got an e-mail from Peter Peter. He liked our songs and our approach to the music and came up with different suggestions. To get a positive critique from one of our biggest idols and one of Denmark's greatest guitarists gave us new hope. From that point on we found a much more personal expression and our songs became of a higher quality. Peter Peter is one of the most important reasons for us playing music today.

3. Who do you consider as a major influence?

It’s hard to pinpoint what inspires us. We are inspired by many different artists, styles and genres. But if we have to mention a few of the artists who have influenced us over the years, it must be Bruce Springsteen, Sort Sol (1977-95), Bleeder, Chris Isaak, Mike Oldfield, Martin Hall, Sune Wagner and Ennio Morricone. The new album has also been affected by more simple acts such as long gone names as Clausen & Petersen and Laban plus Robin Gibb.

4. Where on a music map can we find the Silent Section?

It has always been difficult for us to define the genre we play and to be frank I do not wish to. As earlier mentioned we are inspired by many different things and places. But we never aim for a certain sound or style when we compose and that makes it hard to explain what sort of genre we play. Our only goal is to make a sound that we all like. If I really had to name a genre it would simply be rock music.

5. Who writes the songs and what are they about?

As composers we don't follow a certain pattern. Sometimes we make music that involves all three of us in the writing process. Other times one of us writes and composes songs entirely by himself. Basically it’s a close collaboration between all band members - we all influence the direction of the songs before recording them in the studio. Actually, no one supplies the band with more songs than others. We have chosen to register all our songs as a product of the band since we all participate in the final creation of every track. Our lyrics are often connected to existentialism – the big things and thoughts that touch us throughout life - including the shady sides. We often write about terms like fear, nostalgia, love, isolation and the society that surrounds us.

6. In 2009 the Silent Section released their debut album 'A Final Delirium'. Did your music change since your first release?

The general feeling is the same but many things have happened to our music since ‘A Final Delirium’. The songs from our first album were written over a period of almost five years, so the songs are much different from each other due to different sources of inspiration. There is higher degree of coherence between the songs on ‘Contour Of A Passing Dream’. Besides that I think the new songs are much less complicated and more direct. We wanted the new songs to be shorter than most of the songs on ‘A Final Delirium’. Another thing is that we have moved away from the industrial inspiration and tried to add our songs a certain finish and a completeness which make the songs on ‘Contour Of A Passing Dream’ seem more classically composed.

7. Your new album reveals many different tones. Some songs are emotional and soft and the others are rather noisy and turbulent. Which songs do you personally prefer?

That depends on what mood I’m in. None of the tracks would have made it on the album if we hadn’t all agreed that they were good. I have a good feeling about all of them. I kind of like how different they are, but still fit together on the album. If I really had to name a favourite it must be ‘No Admission To Dream’. This track really sums up who we are and according to me it contains the best individual achievements.

8. How does music affect you and the world around you?

Most of all music is a way to canalize emotions – whether it is rage, love, or sorrow. Music can move you emotionally and bring back memories. Some songs remind you of a certain period of time and you instantly get the same feelings, as you did years ago. You’re able to comment on the society and time we live in through music. For instance one of the songs on ‘Contour Of A Passing Dream’ is about homeless people and life from their perspective.

9. What is your favorite album of the year so far?

Actually I rarely buy new music right after its release. New songs and albums have to grow on me. Sometimes it seems like music gets better over time. However one album in particular has caught my attention this year – ‘Raven In the Grave’ by The Raveonettes. Another masterpiece from the hand of Sune Wagner. In the most beautiful way The Raveonettes return to the style and sound they introduced on “Lust Lust Lust”. Only the overall topic – “age” – differs. Described in the best way on the album’s last song ‘My Time Is Up’.

10. Tell us about your next live shows and tour plans.

We try to put a number of concerts together in 2012. Among other things we plan to play a few shows with an American Shoegaze band.

You can find our tracks, news, info plus photos of The Silent Section on the following pages:
www.facebook.com/thesilentsection
http://itunes.apple.com/dk/album/contour-of-a-passing-dream/id480234678
www.tryghed-tristesse.dk
http://thesilentsection.bandcamp.com
In Conversation Next Wave Shoegaze