Rational Youth and YUL Records Are Back!

on November 29, 2011
The original YUL Records is back and celebrating it's 30th Anniversary with the return of Rational Youth whose original three members Tracy Howe, Bill Vorn & Kevin Komoda are back together and recording again. Back as well are Monty Cantsin, in the flesh and as a virtual apparition, Cham-pang. These are the three artists that started a Montreal electro-pop revolution! Joining them are new artists Derek Falls and Truth Division. The label YUL (aviation code for Montreal) is also back with original (d)istributor UNIDISC, who were incredibly instrumental in our success during the 80s. 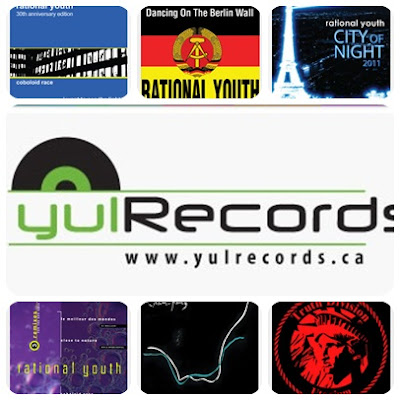 In early 1981, it only took a call from Tracy Howe armed with a freshly recorded demo, played over the phone to local scene maker & record store owner Marc De Mouy, to officially launch the YUL Records brand. Along with the self proclaimed motor mouth Pyer Desrochers, and disco producer Pat Deserio, this group of renegades carved out a slice of Montreal musical history by releasing such influential records as Rational Youth's debut LP "Cold War Night Life", Monty Cantsin's "Neoist Songs" and Cham-pang's "Tantum Ergo" which are all now regarded as 80's classics and vinyl collectables.

Now 30 years later we are putting together a series of very special limited edition extended play "CD EPs" priced as CD Singles all with 6 or more tracks and bonus tracks never previously available and brand new recordings. To complete the set of releases a full-length debut CD album from Truth Division. Later in 2012 we will start issuing special vinyl products such as a Collectors 180 Gram Audiophile 30th Anniversary Edition of "Cold War Night Life" and more vinyl 7 & 12 inches form our 80's vault and new recordings from the 21st century.

Follow the link to find out more about the first batch of releases will be available at the finest record stores across Canada, USA and Europe.