on November 28, 2011
Claps are back! After two great EPs from last year, they have released their fantastic debut album entitled 'Wreck'. They might be the next Experimental Products singing and producing music for modern living in the 00's. A modern take on classic minimal synth. Let's hear what Pat, Sara and Jed said about their music, their influences and more. 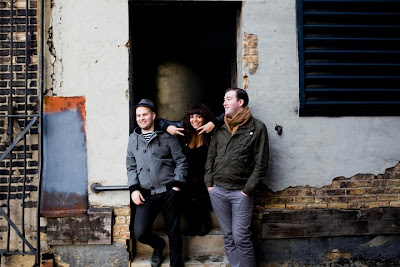 What is the origin of your band name and what did you inspire to take this name?


While we were trying to figure out a band name, we found ourselves reading old radio magazines in Jed’s room. We were reading some of the words out loud and most of them we decided were too complicated, and they were better off being album names. After awhile, we stumbled upon the word claps and we really liked the simplicity of how it sounded.

Where do you come from?
Pat grew up in a small town in Southern Minnesota called Mankato. Jed is from a St. Paul suburb and Sara is from a Minneapolis suburb.

How did you guys meet and what inspired you to make music together?
We all met in college at the college radio station. We shared similar musical interests and soon became roommates so it was quite easy to start playing music together since we had a large basement we could play our instruments in.  From there we just started playing shows around town since Minneapolis is so welcoming to local bands.

Is your music related to any specific genre in music?
Minimal Synth and Synth Pop. I think we are somewhere in the middle of those two.

What is the main topic of the songs, general mood and atmosphere?
Our singer likes to write about things based in real life. A lot of the reoccurring themes are destiny, permanence and isolation. A lot of the more dancer songs have a gloomy topic and we kinda like that juxtaposition.

What do you listen to these days?
We seem to be listening to late 70’s instrumental synth stuff like Jean Michael Jarre and Tomita. And I guess a lot of R&B and Hip Hop in general.

What is your all time favorite record, song or album?
Pat- The Cure “Faith”
Jed- John Foxx “Metamatic”
Sara- OMD “Architecture and Morality”

How do you promote your live shows and your music, any tour plans?
A lot of stuff seems to be done on Facebook these days, so I think a lot of people mostly learn about our shows online. We plan on going east in the spring and hope to do an international tour someday.

How can fans gain access to your music? Do you have a website with sample songs or an official fan page?
Following us on Facebook is probably the best way to get the most recent up dates. Otherwise we have a twitter, tumblr and bandcamp where you can download our music and get updates about the band

In Conversation Minimal Next Wave