September Singles Round Up

on September 26, 2011
With September almost over, here come the singles highlights of the month. We start with Twin Shadow's "Changes" which is a cover of an old Bagarre hit "Circus is Gone" put in a new arrangement. Duran Duran have released "Leave A Light On" which is widely considered as "Save A Prayer" for new generations. Snow Patrol went pop on their fantastic new single entitled "Called Out in the Dark" which also announces a new album "Fallen Empires" for November. Coldplay have released a second single "Paradise" from their new studio album 'Mylo Xyloto' which is going to be released in October. Manic Street Preachers have covered The The's "This is The Day"The video for the song  features retrospective images and videos from their musical career. Austra have returned with the third single "Spellwork" taken form their debut album 'Feel it Break'. Last but not least, Ariel Pink's Haunted Graffiti have returned with his epic new single “Witch Hunt Suite for World War III” a 16-minute synth opus which marks the ten year anniversary since the terrorist attacks of September 11. 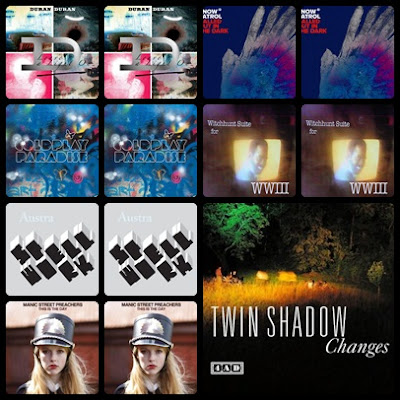