In Conversation: A Terrible Splendour

on June 21, 2011
A New Romantic Cabaret outfit A Terrible Splendour which has been featured here earlier this month are back for an interview. Last week they released they released their debut single "The Russians" / "Slaves to the City" and they are working on their first album. Find out more about the band, their upcoming debut CD, influences and a very special ATS style Poncewave. Enjoy the interview! 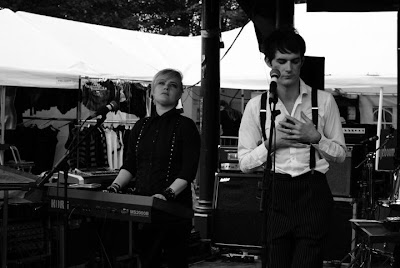 1. What is the origin of your band name, who is A Terrible Splendour?
Lyle: We were practicing at my flat one day and we somehow got to looking at previous Wimbledon finalists on Wikipedia. This led us to Gottfried von Cramm, a gay tennis-playing baron who had the unfortunate task of representing Germany under the reign of the Nazis, whom he opposed. We became fascinated by his story as it contained all the things we’re interested in: blackmail, scandal, conflict and glamour. His biography is called ‘A Terrible Splendor’ so we named ourselves after that, changing the last word to British English spelling.
Martin: I seem to remember us quite early on contemplating a musical on the life of Von Cramm. Quite sensibly we abandoned that idea, and all that remains of this is a song called ‘Society’. Von Cramm, however, remains most definitely a firm inspiration for the band.

2.  In what way is your music related to your image and appearance?
Lyle: I think music and image are hard to separate: in all good bands, they reinforce each other. We don’t strive to adopt a fashionable look but we try and present ourselves in a way that expresses our personalities. For instance, I try and pick outfits that convey a certain genteel, formal androgyny - tailcoats, waistcoats, diamanté and make-up.
Martin: I agree with Lyle, if there is a particular aesthetic to ATS it arose naturally both from ourselves and from the personalities of our songs. We have always had a sense that performance is a strong part of what we do. How we present the songs is as important as the songs themselves, and this extends to our own presentation. I think the characters in our songs would be most at home in a shirt and a tie.

3. Who do you consider as a major influence at the start of your musical career?
Lyle: I love Duran Duran and I admire Nick Rhodes’ synth skills and sense of style enormously. Other influences include Ronny, who was a fabulous French singer of the early 80’s. She had a wonderful deep voice and amazing androgynous allure. The swooshing synths and darkly sensual atmosphere of songs like “Blue Cabaret” inspired me a lot.
Martin: Electroclash, Musical Theatre and F Scott Fitzgerald.

4. Is your music related to any specific genre?
Lyle: I get tired of a lot of bands going on about how ‘we’re not any genre, we’re just ourselves’. They all say that yet all sound alike. At A Terrible Splendour we are pleased to categorize ourselves as Poncewave, a genre we have invented. A bit new wave, a bit cold wave, more than a bit poncy!
Martin: Although I find it difficult to say, I think there is something of both the New Romantic and of the Old Romantic about A Terrible Splendour.

5. What are the main themes and topics of your songs?
Lyle: Drama, despair and personal failings. We are also interested in the grandeur and decline of Old Europe. I suppose that sets us apart from most electronic bands, who are more future-focused. There’s only so many songs you can write about computers though.
Martin: I’d like to think there is a weary dignity to the characters that inhabit our songs. Possibly a little disgust. I have always been fascinated by individuals who were ‘out of step’ with prevailing culture, I believe they may have crept into our songs…

6. How do you promote your music?
Lyle: Through carefully selected live appearances - no more gigging for the sake of it, I’ve learnt that doesn’t work from previous bands I’ve been in. Also we have a website, www.aterriblesplendour.com, and we are on the usual social networking sites. Martin has made some lovely business cards with a picture of Helmut Berger as Ludwig on them.
Martin: They are rather splendid, aren’t they?

7. Who are you trying to address and entertain with your music?
Lyle: Primarily, Helmut Berger. Connoisseurs of synth-pop/cold wave/electro are likely to enjoy us too. Ladies and gentlemen of taste who would rather sip a Martini while dancing to an epic synth track at a disco, than stand in a pub listening to guitar bands.
Martin: Also, I believe, Women in Trousers and Gentlemen in Braces.

8. What do you think of the Human League’s comeback?

Lyle: It’s always hard for me listening to ‘comeback’ albums by bands whose earlier records I love. ‘Credo’ has some enjoyable tracks on it, ‘Sky’ is the first that springs to mind. They have kept their sense of humour, which was one of the things that made them special. I’m afraid the album doesn’t have the same impact on me that ‘Reproduction’, ‘Travelogue’ or ‘Dare’ did though. Those albums still sound futuristic, decades later.
Martin: I have nothing but admiration for the Human League, but I haven’t heard the new album yet, I have to confess.

9. What is your all time favorite record, song, album?
Lyle: Record: ‘Rio’ by Duran Duran. Song: Er, “Rio” by Duran Duran! There is not one bad song on that album, every track is a finely crafted pop jewel. And the title track is an amazing composition, it’s got more hooks in it than most bands manage in their entire career.
Martin: Debussy’s Suite Bergamasque, especially Clare de Lune or the first Roxy Music album. My current favourite song is a Rogers and Hart number called “The Blue Room”.

10. What do you listen to these days?
Lyle : I have recently been getting into some of the more obscure, overlooked synth bands of the 80s - I was listening to Book of Love today for example. I often go to the Systems of Romance blog to listen to forgotten gems from European bands that maybe only released one or two songs, but sometimes produced amazing tracks, like ‘Marilyn en Jean’ by Tonic for instance. In terms of more current music, I am very impressed with the new French Canadian synth act Automelodi.
Martin: I’ve been listening to a lot of Cole Porter recently, and Irving Berlin. The Great American Songbook. I love how perfectly crafted the songs are, and how they may tell a bittersweet story or two.

11. What’s next for A Terrible Splendour, single releases, live shows, album etc?
Lyle: We are pleased to announce the release of our first single on 17th of June. I am bad at remembering dates so chose a date of historical significance, at least for Germans, as it is the anniversary of the 1953 East German uprising. It will be available as a digital release on iTunes and Spotify. We are also playing live on Tuesday 21st June at the Macbeth in London, with a band our fans may enjoy, Savage Furs. We currently have written enough songs for about two albums but we still need to record it all properly!

Martin: Yes, and we’re currently working on our second single, which we’re rather excited about, with the inestimable Jack Duckworth. The album is pretty much written. And is fantastic. If Lyle and I were to hit on hard times I think we could work together in a song factory. Churning out songs to order, songs by the hour.

12. How can fans gain access to your music? Do you have a website with sample songs or a demo CD?
Lyle : Fans should visit http://www.aterriblesplendour.com/, where they can hear three of our tracks, and the music is also available on our Facebook page, http://www.facebook.com/aterriblesplendour. We are currently in the process of mixing some new material, so that will soon be available too. And of course there is the upcoming digital single release.

Martin: In addition to the above I do believe the music is best heard in a live setting. Our next show is to be on June 21st at the Macbeth in Hoxton, London. We shall be channeling the spirit of the aforementioned play into our performance. There will, indeed, be blood.

Top 10 albums or songs that inspired you or you just love.
Lyle : 10 albums I love:

1. Rio by Duran Duran
2. To Have and Have Not EP by Ronny
3. Quiet Life by Japan
4. Forever Young by Alphaville
5. #1 by Fischerspooner
6. Witching Hour by Ladytron
7. Nice Mover by Gina X
8. Sexor by Tiga
9. 3 by Indochine
10.The Garden by John Foxx