In Conversation: Petroleum by Product

on June 03, 2011
The Vancouver based trio Petroleum by Product who were featured here on Burning Flame earlier this year have stopped by for an interview. Here is what Vanessa, Sally and Robin told us about their influences, their image, musical style and further plans in music. 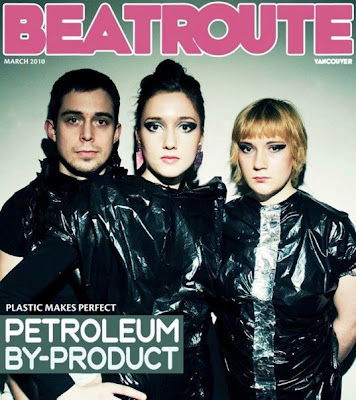 Q: How did you guys meet and what did inspire you to make music together?

Sally: In high school, Vanessa and I were always writing a lot of scripts, many of which were Sci-Fi abstract type films. We loved how in all the Sci-Fi movies the characters dressed so elaborate and fantastic and the visuals were very flashy, shiny and synthetic. We liked the idea of being something so non-humanistic. When we started our musical project, we saw it more like film where people discovered the new fountain of youth out of garbage, trash heaps and men would pay to watch large women wrapped in saran wrap and tin-foil eat mountains of jello. We didn’t even consider the music part of it, just the visuals. At first our music was just sound effects that we recorded that would be placed into the scenes of our ‘play.’ Eventually, we just focused more on the music part of it and our story-part of it simmered down.
We met Robin accidentally while auditioning a different drummer. Robin and this drummer were in a band together, and while we were playing some music in his basement, Robin came running down the stairs in skin tight girl jeans, black died straightened long hair and a gust of male perfume. He immediately yelled at his friend for messing around with us when it was THEIR day to have band practice. When Robin’s friend went out to get something to eat, Robin got on the drums to play around on and he was really good, so we decided that we wanted HIM to be our drummer instead. We could put up with his diva temper tantrums.
Robin: I actually do not remember meeting them.
Q: Who do you consider as a major influence at the start of your musical career?
Sally: Sci-Fi movies, humanity, technology, industry and ridiculous low-budget art movies.
Robin: One of my major influences at the start was witnessing terrible performances of bands in the music scene. After I saw a few of the "in" bands, I was convinced that I could create something that I like. I did not relate or connect to any of the material that was in the city at the time... I still can't.
Q: What genre of music do you consider your work to be? Main themes and motives of your songs…
Sally: I always just say New Wave out of laziness. Main themes tend to be cynical, dissatisfaction, and artificiality of the North American values.
Robin: Our music has changed in direction since our "Superficial Artificial" record was released. I would say that our new sound is more focused and minimal.
Q: How do you promote your live shows and your music?
Sally: We don't usually promote our live shows. We don't even get around to inviting people through the Facebook invites. We just show up and hope maybe others will also.
Robin: We let the promoters do that for us.
Vanessa: What?! Wait a second, am I the only one who promotes our band? Haha. Well, I promote our music by all means necessary.
Q: Who are you trying to address and entertain with your music?
Sally: Ourselves. No one pursues music or art with the intention of addressing the needs of other people (at least not us). We write for ourselves; what interests, fascinates or annoys us, and the people who choose to listen naturally become our selected audience.
Q: In which way is your visual image related to your music?
Vanessa: Our band and music is the immersion of all the arts, it’s an outlet for visual arts, fashion, interactive, and industrial design. Our images are the visual embodiment of our music.
Q: What is your all time favorite record, song, album?
Sally: I’m not really sure what my ALL TIME favourite record is. I go through phases, really intensely, and then move on to something else.
Q: What do you listen to these days?
Sally: If I Could Only Stay Asleep by Patsy Cline, Shake Your Libido by Kuruki, Jungle Cathedral by Animal Bodies, New Gold Dream by Simple Minds, Blue Cabaret by Ronny, Unsatisfied Eyes by Petroleum By-Product: (come on, I had to throw in at least ONE of our songs, hahah), Love Dance by Vision.
Robin: ICB by New Order, Shallow then Halo by Cocteau Twins, You'll Never Own Me by Chaos UK, Exercise One by Joy Division, Unspeakable by Killing Joke, Cry Wolf by 1919, Face of Wood by Modern English, Keys to the City by Peter & the Test Tube Babies, Czerwony Pejzaz by Siekiera, Atmosphere by Joy Division.
Vanessa: Every song I’ve heard by Aaah...! and Tres, Self-titled by Visage, Epic Garden Music by Sad Lovers and Giants, Ce N’est Q’Un Début by Alexander Robotnick, Die Sunrise Tapes by Grauzone, Passion Factory by The Twins, and a lot of Tears for Fears, Simple Minds, Naked Eyes and Boytronic.
Q: Any plans of recording a new material, new record label?
Sally: Yes! Always! We have plenty of unreleased recorded songs. We just need to find the labels to put them out. Pass the word on.
Robin: We're in the process of mixing 7 songs that will be released on a series of 7"s.
Vanessa: And Brian Moss of Vicious Pink is working on a remix of “Convenient and Cheap” soon to be ready!
Q: How can fans-to-be gain access to your music? Do you have a website with sample songs or a demo CD?
Vanessa: We have a FacebookFacebook, Bandcamp, Soundcloud, Youtube, Myspace, and more. And that’s in the order of most to least updated.
Buy Product by Petroleum By-Product
In Conversation