Gary Numan and John Foxx on Back To The Phuture

on September 10, 2010
Mark Jones' 'Back To The Phuture' is to host a special live event on Friday 3rd December 2010 which will see the UK's two synthesizer godfathers Gary Numan and John Foxx share the same bill as live performers for the very first time. With mutual admiration on both sides for a number of years, this show is a development of the professional kinship that began earlier this year when Gary Numan contributed a DJ set with Ade Fention for John Foxx's Short Circuit 2010 event at The Roundhouse. Also featuring will be a live set from Motor plus DJ sets from Mark Jones himself and Richard H Kirk of Cabaret Voltaire. Additional special guests are to be announced.
www.electricity-club.co.uk 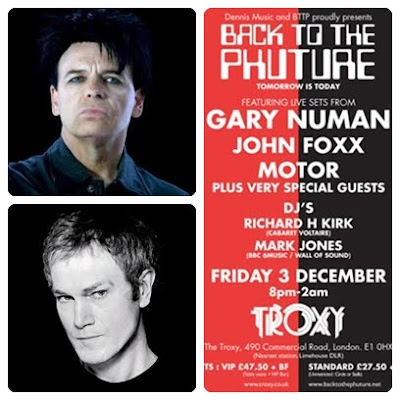