In Conversation: Glenn Gregory of Heaven 17

on May 24, 2010
Enjoy “30th Anniversary Penthouse And Pavement Tour”  exclusive interview for the Burning Blame Blog with Glenn Gregory of Heaven 17. 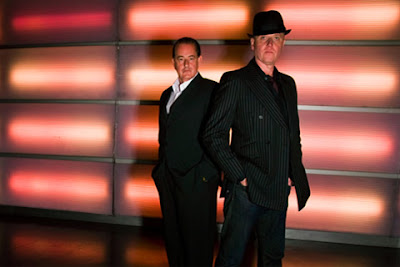 1. Which band or musician was your major influence at the beginning of your career?
I would have to say the early influences of Heaven 17 are very eclectic. Strangely enough I think I can speak for the three of us, as we were all pretty much into the same types of music. There was Glam… Hurrah loved it! Bolan, T Rex, Roxy Music, Jobriath , David Bowie even Slade and The Sweet - all of these bands touched our lives growing up both musically and stylistically.
I wish I had a photograph of Martin in his green fun fur bomber jacket and his skin tight white trouser tucked into his silver platform boots… oh he looked great!
Then there was early electronic music… Kraftwerk, Can, Faust, Gong (hippy Electro), Tangerine Dream… even Pink Floyd and maybe a bit of Emerson Lake and Palmer…
And then there was Black Dance music, Soul and Northern Soul. It was all going in being mixed together and coming out as something else!

2. What is your favorite “New Wave” record, single and album?
I think for me (Glenn) there is no finer definition of new wave Than Blondie. I was in love with the music and absolutely in love with her. I bought the first album in a second hand record shop in Sheffield called Rare and Racy (still there) and we used to play it from morning till night then we’d go to a club and dance to it. I also liked Talking heads as well.

3. How important was the ‘The Steel City’ tour for Heaven 17 and the Sheffield bands, was it the first time, after so many years, that the Human League and Heaven 17 were on the same bill?
Yes the Steel City Tour was the first time that all three bands had played together and I think it was an important step for Martyn and Phil to overcome the split of the Human League. Even though it had happened a long time ago, it still affected the way both bands felt. The fact that we did the tour together helped bring Martyn and Phil back to a closer relationship which is where they need to be. I think it would be great to get them together to perform the first two Human League albums live….COME ON IT WOULD BE AWSOME !!! I’d pay big money for that one.

4. What do you think about the reception of Penthouse and Pavement in 2010? Is there new Fascist Groove Thang?
The reaction to us doing Penthouse and Pavement live has been much greater than I anticipated. It has been fantastic. We toured the show in Germany recently and I was totally blown away by the reaction from the audiences. There is so much love there that I felt like getting down off stage and hugging every single person. Some night the show was 30 minutes longer than it should have been because they wouldn’t let us leave the stage. in Frankfurt I had to play some acoustic songs while the rest of the band decided what else we could do! What a wonderful experience.

5. Do you feel you have influenced any of the bands that are around today?
I think we have, yes. It is a great honor when people mention you in such a way. It’s a real buzz. We have been lucky enough to work with some people that quote us as influences. For example, the collaboration with La Roux was a great success and an absolute pleasure.

6. Do you follow what your contemporary musicians are up to?
Sometime we do play festivals and country house gigs where we are on the same bill as some of our contemporaries. It is always great fun to catch up. Bands that you might have been in hot contention with back in the day are now just mates. It’s a nice place to be. A lot of people are still making new music and touring and I have some real genuine friends from that time. It reminds me of a school trip when everyone gets back together.

7. Did you catch the recent BBC 6 music live collaborations between Gary Numan and Little Boots? Your thoughts?
To be honest I enjoyed it but I’m not sure there was much actual collaboration, it seemed Mr. Numan did his stuff and Miss Little Boots did her stuff and then they kinda did there own stuff together!
I thought Gary looked and sounded great though.

8. Do you think the internet has played a role in the public getting interested in your work again?
Definitely! The way people listen to music these days is so led by the internet, the fact that music is so easily obtainable and the way search engines recommend music is so influential. If you like this, you might like this! I love the way you can get led to find a piece of music or a band that you had never heard of.
Every song is as new or old as the next… no dusty album covers out from under the stairs… just new pristine computer music… if you want to find out more you easily can but if you just want to listen it’s a very non judgmental way to do it.

9. Are there any other album reissues scheduled for the near future?
Martyn has been talking (already) about the possibility of playing The Luxury Gap live… now I think that’s a much more complex issue than Penthouse and Pavement. If we do I suppose there may well be a re-issue of that album. It would be quite an undertaking though, to tour that album live… were still at the arguing stage of that passivity… watch this space!

10. Are there any possible tour dates outside UK in 2011?
I would think it is almost 100% certain that we will be touring more next year… the recent German tour was such fun and so successful we’d be crazy not to want to do more.

Details of the radio show and Heaven 17 is on the radio station’s website here - http://absolute80s.com/.