on May 25, 2009
Vicious Pink was a synthpop duo formed in Leeds, England in 1981, and it consisted of Brian Moss and Josephine Warden. They are remembered for three dance singles: "CCCan't You See", "Fetish", and "Take Me Now", produced by Tony Mansfield of New Musik fame. Vicious Pink were one of a few bands in the early 1980s that could be described as having a techno sound, and can be credited for coining the term for describing music on 27 March 1982, long before it was used by Detroit DJs in 1986.
Find out more about Vicios Pink in an exclusive interview with Brian Moss done for the Burning Flame Blog on May 25, 2009. 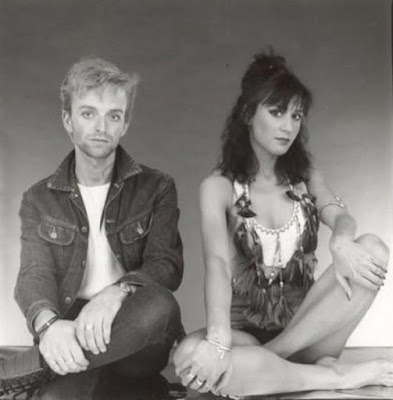 
1. Could you tell few more facts about Vicious Pink, when it was formed, where you and Josephine met and how you came up with the band name?

We formed in 1981. I met Jose when I was DJ at an alternative night I put on with friends, at a Pub called The Adephi in Leeds May 1979. I also met Dave Ball and Mark Almond there at a later date.
Jose, Dave Ball and I wrote our favourite words down on lots of pieces of paper, turned them upside down and shuffled them about. Then we each chose one of the pieces of paper, after that we rearranged them into the name Vicious Pink Phenomena. It was a kind of lottery I guess lol. We thought it sounded like it could be the title for a 50’s Horror B Movie.

2. Which band or musician was your major influence in writing and producing music?

We had lot’s of favourites, Jose liked Roxy Music, The Sex Pistols The Stranglers and other punk bands. I liked David Bowie, DAF, Alice Cooper, Devo and a lot of New Wave stuff.

I can’t say any of the above influenced our sound. We wanted to experiment with the new technologies that were becoming available, rather than the traditional instruments.

We sampled Russians on short wave Radio singing carols, then made a completely different melody from them (It was the height of the Cold War, we wanted to warm relations a little :-) That was for “Cccan’t You See”.
We used old Volvo brake drums and spares for percussion, real chains for Fetish, and more.

3. How would you describe your music style at the time your first single was released?

"My Private Tokyo" was our first single, I would describe it as “Techno Dance”, in the lyrics we say “Hi lo Jap techno that’s My Private Tokyo” “I got all the facts on the Datsun” “I love to listen to the YMO” The song was about the new wave of Japanese Technology, influence, and goods coming to our Country. 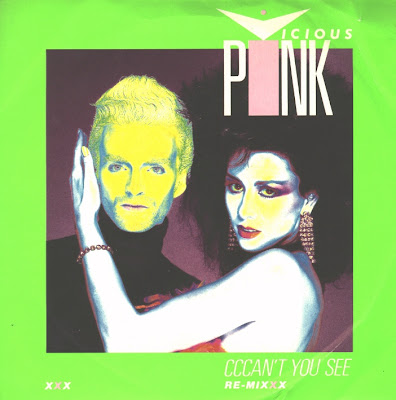 4. What happened to the unreleased Vicious Pink albums, did Parlophone refuse to release them? Was “Pleasant Blue” the only Vicious Pink that was released on CD?

Parlophone did refuse to release it, they said they wanted a hit single first. Jose, I and Tony Mansfield did argue with the new boss of Parlophone, to keep promoting "Cccan’t You See",
He said if it rises in the charts 2 weeks in a row on it’s own steam they would get behind it (we had been in the UK top 100 for 9 Weeks at this time, number 2 on London’s Capital radio chart and number 2 on Rock pool NYC dance chart) It did rise on both Weeks but then sadly it was too late. (They were nail-biting times I can tell you) To be honest the Head of Parlophone only really understood music that was guitar orientated, he said to us…
“You need more guitars” Tony said to me recently “he must have been stupid or deaf or both”

Hugh Stanley Clark Our A & R man also the person who signed us, had already left Parlophone. That left us with no one with any real power behind us at the label.

The ironic thing is that "Cccan’t You See" sold more than 250,000 copies, easily enough to make top 10 or higher.
The sales were first high in the North of England (Where we were from) and then high in the South. Because of that Gallop weighted us lower down the chart for not having an even spread of sales.
“Fetish“ and “Take Me Now” had similar success in charts.

A Year after we left Parlophone Cccan’t You See charted at number 24 in the USA, without any kind of promotion from us. We never even knew it at the time.
In 1989 “8.15 To nowhere” got to number 2 in parts of Europe.

5. Did you record videos for any of your songs?

We never had an organized video shoot, but we did get filmed for various TV shows.
I have a copy of the shows on Betamax tape that I’m getting transferred to digital, if the tape has survived the test of time.

6. Are you and Josie Warden still keeping in touch?

Sadly no, we lost touch quiet a few Years ago; hopefully one-Day Jose will find me in cyberspace.
We did however write more VP demos after we left Parlophone and started the band Love and Destruction in 1987, we also played gigs with this band.

7. What do you listen to these days?

A wide range from Metal to Classical. Part time I work with bands on tour so I get to hear a lot of new stuff, mainly Rock.

8. What do you miss in today’s music the most?

In the pop world cool lyrics,
What I don’t like is too many songs have child like nursery rhyme style lyrics.
Too many cheesy sounds and melodies added to music, to the point where I cringe then turn it off.!

That’s a difficult one.. Hounds of love Album Kate Bush.

10. Is your music in any way related to any band present today?

I think it’s had an influence; we’ve been sampled by Nightmares on wax that reached number 1 in the UK dance charts.
People say Stock Aitken Waterman took some of our style.

Our name is used for a lot of things examples a female Ice Hockey team in the USA called Vicious Pink,
Nights at clubs, lots of expressions in speech “A Vicious Pink wound” DJ Vicious Pink and Pets names lol

11. Do you try to expose your music to younger generations?

I don’t personally; they seem to find it for themselves. A 17 year old called Jesus form Venezuela painted us last Year.
I get a lot of messages from all ages, a lot are quite moving, that for me makes what we did all the more worthwhile, when you touch peoples lives in a positive way, from Countries around the World.
I get a window into their World, stories like what they were doing the first time they heard VP for example sneaking into a night club under age etc.

I never thought when we started out that this would happen.

One day one my mates who is about 20 had this song on his mobile phone, he said “what do you think of this” it turned out to be Fetish, I laughed and said “I co wrote that” He was in disbelief was well shocked.

I have to wait for the right moment to contact my publishers, more hits/plays on the myspace profile also on the unofficial myspace profiles etc.
If the market is not there the record companies won’t be interested.

The story will continue….