Mydolls- A World of Her Own- Q&A

on July 05, 2008
The Houston Punk band Mydolls have released a two box CD which features their material from 1978-1986.Consisting of three women and one man, they combined their driving rhythmic sounds with clever and insightful socially aware lyrics infused with feminist observations. This double disc collection features their 1981 3 song 7" EP, 1982 2 song demo, 1982 "Imposter"/"Exorcism" 7", 1983 "Speak Softly, But Carry A Big Stick" 12" EP, 3 song 1983 demo, 1983 track off the "Cottage Cheese From The Lips Of Death" comp LP, 1 song 1984 demo, previously unreleased 3 song 1985/1986 demo, various live cuts from 1981, 1983, and 1984, and an 11 track 1980 demo featuring previously unreleased songs along with early versions of songs that were later re recorded. 24 page booklet includes a detailed band history as well as photos and lyrics. 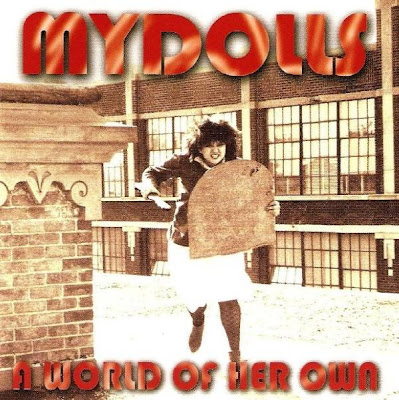 This is a very special interview with Trish Herrera, the creator of the band Mydolls, done for the Burning Flame Blog.

1.Something I'm always curious about is how the bands got their name, so how did you come to the name Mydolls?

TH:Mydolls and Really Red were at an Indian restaurant eating marvelous food and drinking Pim's cups here in Houston and there was a popular band called Heart , so we thought "Hey, how about Ovary? and then some one said "Mydolls" like the pill for menstrual cramps. So there is was, with a different spelling. I heard there is also a house wife band called My Dolls and also a doll for children called My Dolls.

2.What bands or musicians from the era do you keep in touch?

3.Do you play the summer festivals?

TH:No, we don't regularly play any more. As you know we disbanded in 1986 Except for special occasion. We played for Phil Davis, our sound man's funeral/wake and we are planning to play for a 30 year reunion of the local punk club that started here in 1978, The Island/Rock Island.

4.Is your music in any way related to any band that is present today. What new band do you see as the reincarnation of the sound of Mydolls?

TH:We were so all over the map with our sound. I could not pigeon hole any one band into how we sounded. I support new sounds, new creations . This is what we did in the 80's and we want to see more women up front playing music, creating new sounds and saying some thing.

5.What do you consider as the New wave/punk/ post punk anthem?

TH:I think that is different for everyone. For me it is, Let's Have a War, by Fear. It makes fun of idiots who want war. It pertains to the world crisis as it is now. Until war stops, that is my personal anthem.

6.'A World of Her Own' is a record that features old Mydolls song remastered. Who was the record produced by?

TH:The CD came out on May 17, 2008 It is called 'A World of Her Own'. It is on Grand Theft Audio CD includes 2 CDs and a 24 page booklet of all of the songs plus photos, flyers and lyrics 2008 You can buy it at www.bompstore.com or www.soundideadistribution.com

7. Do you also plan to record new material?

TH:We are actually working on a song called Don't Fucking Die for our guitarist, Linda, who suffered breast cancer two years ago and beat it.

8.Are you trying to expose your music to younger fans?

TH:No, but younger fans find us. I think because we are part of what formed the genre "Punk"

9.What do you listen to these days?

10.What do you miss in today's music?

TH:I miss that people buy music off of the internet and we don't congregate in music stores feeling the wax in our hands any more.

12.Did you listen to the new Bauhaus record released this year?

13.Do you buy music records? What was the last record you bought?

TH:Saturday night, I love Billie Holiday and I love French movies. Sunday morning, I love Blues. We have a great radio station KPFT Pacifica here that has the most fantastic blues show on Sunday morning and I always turn it on.

Here is a descriptive review of Mydolls.

Mydolls' 'World of Her Own' Review