on December 15, 2007
Furniture was a British group, that was active from 1979 to 1991. The group's members consisted of Jim Irvin on vocals and percussion, Sally Still on bass, Maya Gilder on keyboards, Tim Whelan on guitar, Hamilton Lee on drums and Larry N’Azone on saxophone. 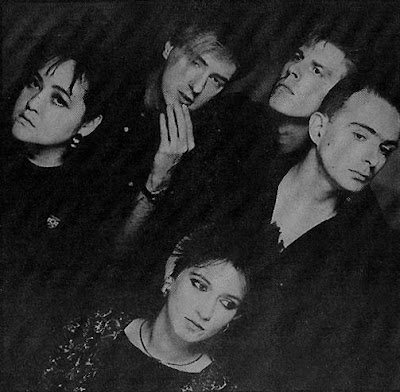 Furniture was formed in the Ealing area of London, England. The group's founding members were Irvin, Whelan and Lee. After few line up changes in the early 80's, Still and Gilder joined in 1983 and Furniture released their first EP entitled 'When the Boom Was On', on the Premonition imprint of the Ealing based Survival record label. Switching to the main label, they released their next single, "Dancing the Hard Bargain", produced by a former member of Blue Zoo, Tim Parry; followed by "Love Your Shoes", produced by former member of The Teardrop Explodes, Troy Tate; and a self-produced EP "I Can't Crack". Some of this material was collected on an LP on Survival, The Lovemongers.
In 1986 the band switched to Stiff Records and released the single "Brilliant Mind", which peaked at number 21 in the UK Singles Chart. "Brilliant Mind" is the band’s most popular song. It has since been used on a series of 1980s compilation albums, and as regular incidental music in "World Shut Your Mouth" for the character with the cymbals. A re-recorded version of "Brilliant Mind" featured in the John Hughes film, Some Kind of Wonderful. 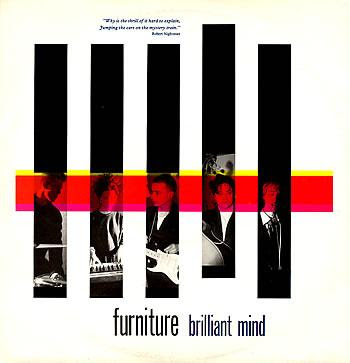 The band attempted to build on their success by releasing a second single, (a re-recorded version of) "Love Your Shoes". By this time Stiff Records was in financial crisis and could only afford to press a limited number of singles. Advance orders for their album 'The Wrong People' were fulfilled with a pressing of 30,000 copies, which sold out quickly, but Stiff Records went into liquidation and was sold to ZTT who pressed no further copies of the album.
In 1989 the band signed to Arista Records and released the album 'Food, Sex and Paranoia', which was produced by Mike Thorne. Sessions got underway for a third album, to be released on Survival (who also managed the band), but were curtailed when the label's recording studio was shut down. Furniture decided to take some time off after a series of gigs, one of which was a headlining slot on the second stage at the 1990 Reading Festival, and reconvene after the release of a compilation album, 'She Gets Out The Scrapbook' - released on vinyl and CD by Survival in 1991. 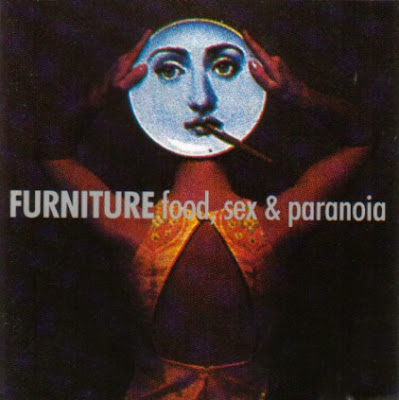 But the reunion never happened. Irvin made an album under the name 'Because' (1991), and has since been a music journalist for Melody Maker, Mojo, The Guardian and Time Out. Whelan and Lee went on to form Transglobal Underground in 1992.
An active fan forum, named "Wrongpeople" after the band's album, has existed since 2002 on Yahoo. Fans of Furniture discuss the band's music, and exchange information and updates on re-releases.