on May 11, 2007
There is not much info on the only female performer that was part of the romantic movement in the early 80's. Never managed to find out the real name so we will address her with her artistic moniker. She was brought up in the grim Northern industrial area of France and left home at 14 to go to Paris, doing all kind of different jobs. She took dancing classes, used to model and then stopped everything and started to write songs. 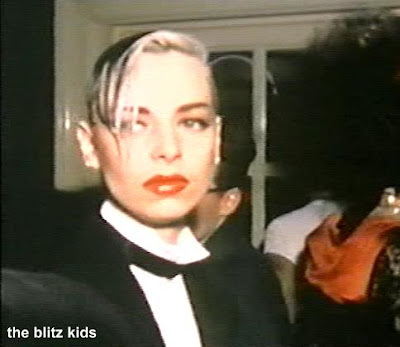 Club entrepreneur Rusty Egan met Ronny in the Paris club Privelege and introduced her to the whole New Romantic movement and she soon became a regular at the Blitz Club. Ronny released three singles co-produced with Midge Ure/Rusty Egan, Vangelis and Peter Godwin. The were all released in 1981/82 on Polydor, "If you Want Me to Stay" has grown into a an New Wave classic in the Internet era. She also appeared on the Ultravox 'Station' record sleeve.
New Romantics Peter Godwin Ronny The Story of... Ultravox